Last week, for the second time this spring, a lobster fishing boat
pulled a rare blue lobster from the ocean in their nets from along the North American east coast. The crew of The
Potluck could hardly believe their eyes at the sight of the bright blue
crustacean. It was a one in two million chance 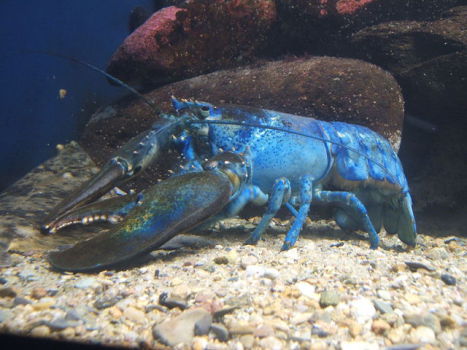 The first blue lobster was caught by Canadian fisherman Bobby Stoddard off the coast of Nova Scotia in early May. He has put the crustacean up for sale to the highest bidder. There is one caveat on the sale -- the lobster is not to be eaten. Cooking would destroy the amazing electric blue color. (Source: The Huffington Post)

The second blue lobster was caught off the coast of Ocean City, Maryland. For the captain of The Potluck, John Gourly, this was not the first time. He caught a blue lobster about nine years ago, but it didn't live long. He had planned to sell the lobster this time. Then he found out that the National Aquarium in Washington, D.C., was looking for a blue lobster. It was an easy decision for him to donate the lobster instead of trying to sell it. This way many people will get to see the little one-pound lobster, now named Toby.

According to the University of Maine Lobster Institute, the bright blue coloring is caused by a one in two million genetic defect. (Source: The Baltimore Sun)

A pregnant blue lobster at the Northumberland Fisheries Museum and Pictou Lobster Hatchery in Nova Scotia is being closely watched. She was caught for the facility by a fisherman with special permission to keep her. Ordinarily, by law, pregnant lobsters must be returned to the ocean. The lobster has over 3,000 eggs, or "berries" under her tail. It is not known whether the babies will be blue like Mom or not. Experts at the hatchery are excited to discover what her offspring will be like. (Source: The Globe and Sun)