Seattle Barkery Has Gone To The Dogs 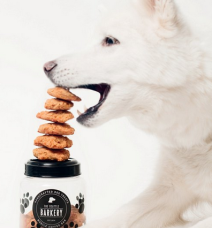 Have you ever taken your dog to the park and forgot to pack treats?  Or perhaps, it’s a special occasion and you'd like to personalize a birthday cake for your furry four-legged pal. Purchasing edibles from mobile vendors found in most green acre recreational areas don't usually fit the bill, unless your Fido was brought up on hot dogs and french fries. That is, unless you reside in Seattle and frequent the dog park known as the “Off Leash Area Edmunds (OLAE)".

At that location, dogs are not only permitted to run free, swim, meet new friend — but, they can also dine at the ‘Seattle Barkery,’ a food-mobile that offers up a menu meticulously tested to appeal to a dog’s taste buds. 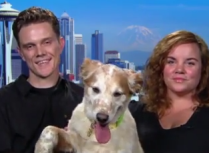 Ben & Dawn FordDawn and Ben Ford are the creators. They met in the restaurant industry and ran a dog-walking business for years. After mass-market dog treats started getting recalled, Dawn decided to design and test a menu of dog treats herself.

Selling from a food truck came next. Today, their days consist of preparing the food fresh in their home kitchen. This five-hour process includes Ben making all the primal stuff, such as chicken feet, duck feet, chicken hearts and duck necks. All concoctions were developed in recipes they initially tried out on their three dogs. And they are “supe 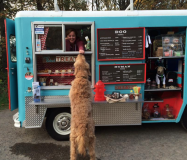 r-picky” eaters noted Dawn who has eaten the treats herself, but acknowledges they’re really not for "human's taste."

“People have spent a lot of money on treats that their dog didn’t like, or only liked once,” she notes. But with her menu items, such asther PB & Banana Bones ($1.50 each) and Beefy Carrot Bagels ($2.50), the Barkery has provided “100 percent satisfaction” so far.

When it comes to cakes, the Fords create them by special order. “Cakes for Dogs” can be ordered in advance by phone or their website.  Dawn adds cream-cheese frosting and bacon sprinkles, with a dog-bone-shaped or chicken-foot topper. They’re served on a Frisbee and are priced at $30 small, $40 large.

All monies accumulated from the truck’s tip jar goes to the local nonprofit Old Dog Haven. To date, almost $3,000 in a year’s time has been collected.

“It’s something we’re really proud of,” Dawn adds. Leftover treats (when they have them) are also donated to the Seattle Animal Shelter and to pets at a Shoreline tent city.

The next time you're in Seattle with your dog, make sure to stop by and tell them PetsLady sent you.

The Mola Mola Animal Video Of The Day!!!

Woodchuck Eating An Ice Cream Cone! Move Along! Nothing To See Here! The Animal Video Of The Day!!!