Seal Pup On The Dash In Scotland

A seal pup in Dumfries, Scotland, disturbed by stormy seas, was found
wandering around the Cairnryan ferry terminal seeking a spot to wait out
the weather. Concerned employees tried to return the animal to the sea,
but 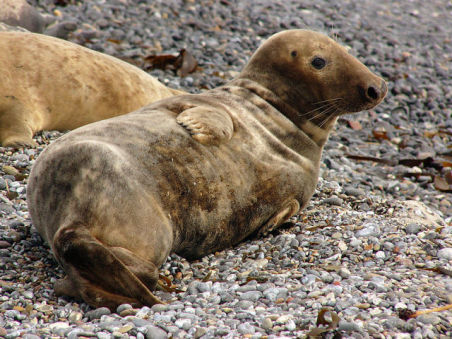 Seal Pup (Photo by Andreas Trepte/Creative Commons via Wikimedia) the animal, later nicknamed "Smartie," wasn't ready just yet. He
ended up finding the perfect place to wait out the storm -- on the
dashboard of a car.

Smartie had made his way into the car park and when he wouldn't return to his place in the ocean, one of the employees put him into the trunk of his car until the Scottish Society for the Prevention of Cruelty to Animals (SPCA) could come and collect him.

While the storm raged on, Smartie apparently decided that he needed a different view of what was going on. He pushed down the back seats of the car and worked his way up front. By the time the SPCA arrived Smartie was lounging, safe and dry, on the dashboard of the car. He probably was considering that he was pretty smart as he happily watched the storm through the windshield.

Smartie is now living at the National Wildlife Rescue Center near Alloa, Scotland. The plan is to return Smartie to the wild once that they are sure than he can fend for himself. Of course, this is contingent on his willingness to go. By now he may be dreaming of having a car of his own.

Deck Your Halls With Lots Of Doggies

Gone To The Dogs On Valentine's Day
Comments