Apparently seahorses are a bit shy when it comes to sex -- at least when
they are in captivity. Conservationists at the London Zoo in
England have discovered that mating pairs do better and are more 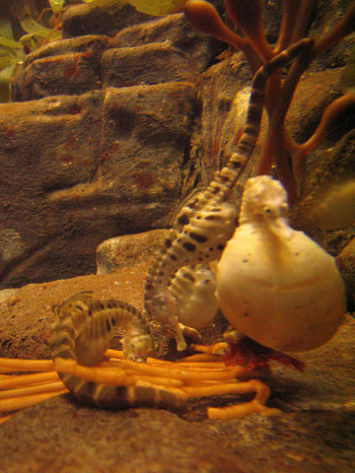 Pregnant Male Seahorse (Photo by Jaro Nem?ok/Creative Commons via Wikimedia)successful at breeding when they are provided with a private tank -- a
sort of honeymoon suite to really get them in the mood for love.

Seahorses around the world are declining in numbers and several species are especially vulnerable. Decreasing coastal habitat and pollution are major contributors to the decline. Though tiny, the small fish are also harvested to be sold as food, souvenirs, and for use in aquariums. Efforts in conservation for seahorses also benefit many other marine species.

The creatures are a protected species in the United Kingdom and the London Zoo is managing to boost populations. The breeding program is taking place in a warehouse tucked behind the public aquarium. The method of providing pairs with their own private tank has been so successful that the project has been able to share more than 300 seahorses to breeding and research programs all over Europe.

The mating begins when a number of males and females are placed in a large tank in a sort of seahorse version of speed dating. As the researchers are able to identify pairs that have found that special love connection, the seahorse couples are quickly whisked away to their private tank to consummate their relationship. While there is no official ceremony, seahorses generally mate for life. 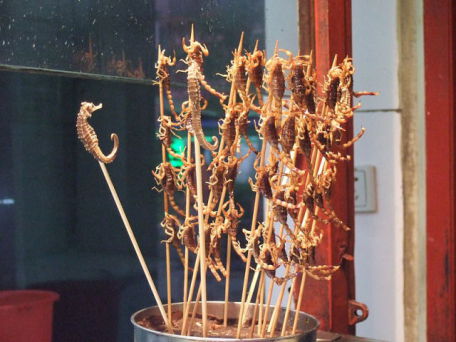 Seahorse and Scorpion Snacks on Sticks (Photo by ginny freeman/Creative Commons via Wikimedia)Prior to the use of the honeymoon tanks, the researchers found that once a pair started their courtship dance another male (or occasionally a female) would try to cut in on their action. This would disrupt the mating process and curtail breeding.

When seahorses have chosen one another they show it in an overt manner -- they entwine tails, twirl each other, and promenade together along the bottom of the tank. Some scientists believe that this courtship dance synchronizes the reproductive cycles of the pair so that they will be ready for one another when the time comes.

It is the male who gets pregnant and carries the eggs to gestation. Once the young, called fry, are born they are removed to another tank so that the pair can breed again. Seahorses do not care for their young, so this is not a disruption of their natural routine. Each pregnancy can result in over 1,000 young, but only about a half a percent live to maturity. Seahorses can breed again within hours of giving birth.

The program has been in operation since 1996 and as of last week the public can see it in action in a special exhibit.

Next month scientists will gather in Faro, Portugal to review the need for conservation of seahorses worldwide.