As beaches along the Pacific coast heat up and dry out, they seem to be predicting doom for leatherbacks, the largest species of sea turtle in the oceans. In addition to the historical threats of egg poaching and the turtles getting caught in fishing
nets, the higher sand temperatures 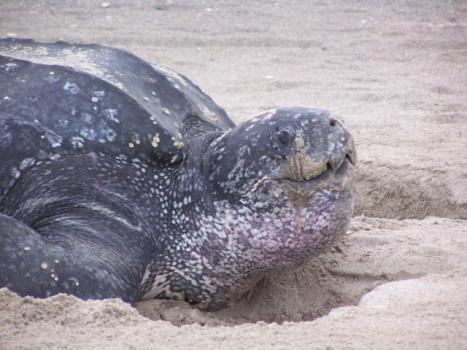 Leatherback Turtleappear to be increasing mortality
rates among eggs and hatchlings.

A new study in the journal of Nature Climate Change shows a projected climate-change related decline in the leatherback population. If actual climate patters match the projections made in the study, the eastern Pacific population of leatherbacks will be decimated by as much as 75% by the beginning of the next century.

The birthrate of the turtles naturally rise and fall from one year to the next in response to weather variations. More eggs are laid and more hatchlings make it into the ocean during cooler and rainier years.  These years also affect the temperatures inside the nests, which can change the sex ratio of the turtles. More male hatchlings emerge in cooler weather to help balance the predominantly female sea turtle population.

The projections created from the study demonstrate that warmer,
drier years will become more frequent in Central America
throughout the century, along with high egg and hatchling mortality in a species whose population is already on the critical list.

At one time on the Playa Grande in Costa Rica there were 1,500 turtles nesting. Twenty years later there are only 30 to 40 each year.

Originally the population decline was due to the poaching of eggs in the area which few, if any, hatchlings would survive. Work to protect nesting beaches is ongoing. For the number of leatherbacks to recover the researchers are looking into methods such as watering and shading the nests to mitigate the impact of climate change.

From The Lowcountry to Animal Planet: Local Pups Make Good at Puppy Bowl
Trophy Hunting To Save Endangered Species Is Counterintuitive
Comments