The 2010 World Cup soccer championships will begin tomorrow in South
Africa and go on for a month.  Day and night, you'll be able to watch soccer matches (just think!), and as this really is an
international event, unlike the World Series, you just have to route
for a team... and so does your 'World Pup.'

Fortunately, dog clothing designer Trixie + Peanut has created some
stunning designer dog jackets just for this occasion - but, as you
know, your World Pup will be able to wear her Track Jacket all year
round, because soccer fans never stop routing for their teams. 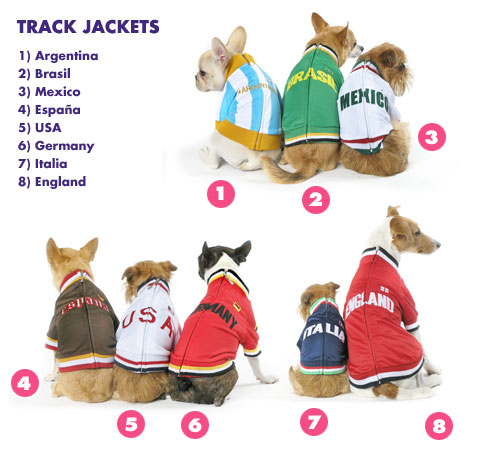 Trixie + Peanut have designed jackets for dog fans of 8 countries -  Argentina, Brazil, Mexico, Spain, USA, Germany, Italy, and England. Most of these teams are in the top ten teams according to the experts, although the U.S. barely squeaked in at number 10, and Mexico didn't make it.  Nevertheless, in 30 days who knows what will happen?

So, pick a country and make your dog a 'World Pup' and he can show off his Track Jacket all year round and make the other pups drool.