Reporting in the online edition of Biology Lettters today, biologists from three Japanese universities present their findings on the mating habits of a sea slug, Chromodoris reticulata, living in the warm waters of Southeast Asia.  This essentially shell-less mollusc not only sheds its penis after copulation, but grows a new one within 24 hours! 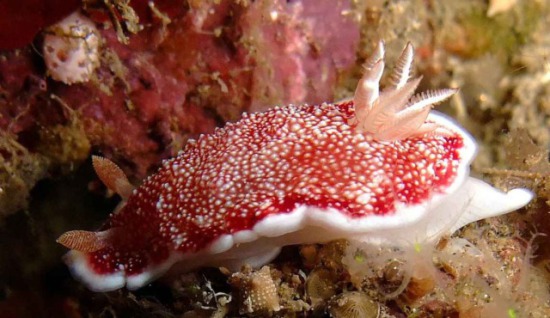 The team describes the Chromodoris reticulata as a hermaphrodite, performing both male and female sexual roles.  It deposits its sperm into another Chromodoris reticulata as it simultaneously receives sperm from yet another member of its species. It then discards its penis, which projects from its sides to enter the partner's vagina. The penis is full of spines, which may make it difficult to retract into the slug, so perhaps the shedding of the penis is biology's adaptation to the spiny penis condition - just get rid of it.

Within 24 hours of shedding one penis, the Chromodoris reticulata grows a new penis. This can occur three times, so copulation is possible up to three times, with a new penis each time.

Though the scientists noted that other creatures discard body parts after copulation, 'few are willing to give up their penises.'

Creatures
News Stories
Science
Weird, Odd or Bizarre
This Is One Big A** Spider! The Animal Video Of The Day!!!
Snake On A Plane: Python Flies Air Australia

Is This A Real Pterosaur? The Animal Video Of The Day!!!
Comments