Scent Hounds Are All Ears

For scent hounds who are known for their larger than average 'drop ears,' it begs the question: "What's up 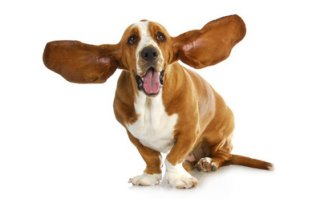 with those dumbo-size auricles? Some say it provides their masters with an easy way to pick them up. President Lyndon B. Johnson had two beagles in the White House named Him and Her that raised the ire of the public when he lifted them by their ears while conducting a press conference on the White House lawn.

President Johnson & Him
But whether or not the president should have been slapped with charges of dog abuse, it does appear that the scent hound's ears are quite a hardy appendage. And while some say they have nothing to do with aiding the mutt's hearing, it does improve the dog's effectiveness in tracking. Hounds have a long history of hunting, and  were bred specifically for that trait down through the ages.

So how do their ears come into play? Well -- dropping those droopy ears to the ground helps those canine gather the scent of its prey. This is accomplished by using their ears to work as a funnel to sweep, stir and trap the scent around their face.

Others disagree and think when a scent hound rubs the ground with his ears, they stand the chance of developing ear infections or wounds from underbrush or poisonous plants. And while cropping a beagle's ears is no longer legal in such countries as the UK, many feel that erect ears would allow this breed to not only appear more aggressive but to also hear better.

Does the Scent Hound have Blood Brothers?

unds are are also cultural icons, of sorts. Snoopy, from Charles Schulz’s Peanuts comic strip, is probably the best-known ambassador of the breed, but Odie, Garfield’s pal/nemesis in Jim Davis’s strip is also a beagle. Charles Darwin’s ship on his five-year nature voyage was called the HMS Beagle, an appropriate name for a seeking expedition. The beagle even appears in some of Shakespeare’s works, including Twelfth Night.

And the hounds that belong to the aristocratic Crawley family and are featured in the widely popular TV show, 'Downton Abbey,' are actually working actors that go by the names of Roly and Ellie but portray the roles of 'Pharaoh' and 'Isis' in the series.

If you are considering becoming a scent hound master, you will want to learn how to keep those big ears 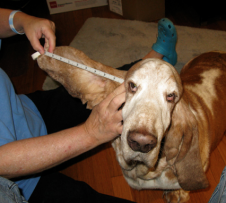 Caring for your Hound's ears is an important part of Hound ownership. When grooming, also conduct a careful inspection of their ears. Any nicks or small cuts and abrasions on the tips of the ears should be attended to with first aid immediately.

Always inspect the external ear canals for wax build-up and any other foreign material, such as foxtails or prickers. These objects can be cleared away by using a cotton ball that has been moistened with either witch hazel or rubbing alcohol. Any thing that appears more serious should be brought to the attention of your veterinarian at the earliest.

And if you're still unsure why scent hounds have such large ears, you have only to look to elephants who sport the largest ears and earlobes in the animal kingdom. Elephants don't sweat so they have a difficult time keeping cool. When you see elephants moving their ears back and forth, they are in effect, fanning themselves with their built-in cooling system - namely, their ears.

Take a lesson, you scent hounds - your flappy ears may have an alternate purpose - but then again, scent hounds don't really need fans - they and the world know, they're definitely cool enough without them! 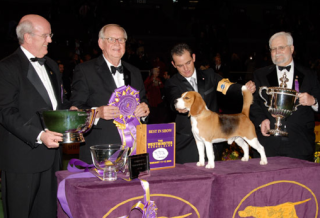