In Ireland there is a little town down Dublin way by the name of
Wicklow. It is here that one small restaurant, The Lighthouse, has been
compelled by forces of nature to feed a seal three times a day. The
townsfolk have dubbed the seal "Sammy" and he has become something of a
mascot along the waterfront. And he is something to see! 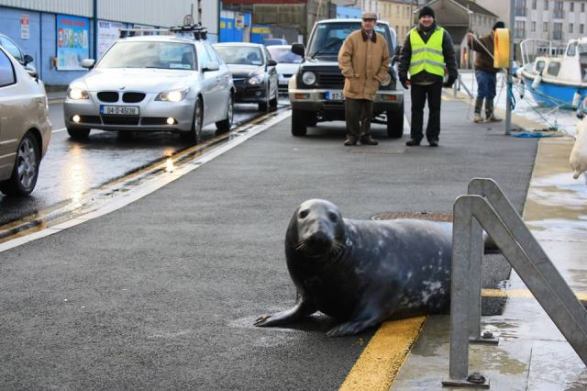 Somehow Sammy figured out that the restaurant was a fish and chips shop and started hauling his chubby little pinniped self out the of harbor and across the street to beg for food. He apparently even knows how to look both ways before crossing the small two lane road to avoid cars. 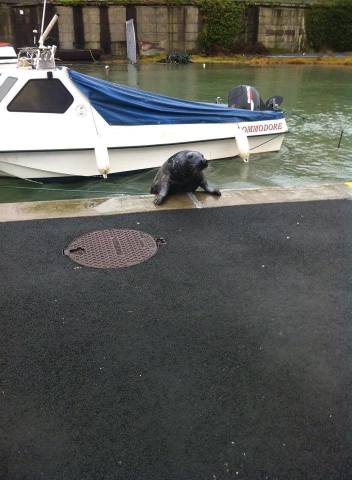 The begging got to the point where the restaurant had to finally give in and throw him a fish now and then to get him to leave them alone. So now he shows up for a meal three times a day -- at 9 a.m., at 1 p.m., and at 4 p.m. He also apparently really gets the idea of a restaurant. On Valentine's Day he even brought a date with him. She must be his true love since she was been tagging along ever since. The locals haven't named her yet, however the restaurant is having locals vote for a name. I don't know what the options are, but I'm voting for Sally.

Alan Hegarty, the owner of the shop, says "When I go to feed them Sammy steps back so I can feed her first. He's a proper gentleman."

What the restaurant feeds them each day is only a fraction of what they need to survive, so they are obviously are still using their hunting skills to survive. Either that or they have other shops trained as well and just haven't let on to the press.

We All Have That One Friend -- The Animal Video Of The Day!!!

PetsLady's Pick: Cute Dachshunds On Vacation Of The Day
Dogs Swimming Underwater! The Animal Video of the Day!!!
Comments