While it just took 9 judges (with a 5-4 vote) to deliberate on the historic decision allowing same-sex marriages in the United States, there’s Prevalent throughout the animal kingdom and in practically every species, perhaps all those four dissenting Supreme Court justices needed to consider was the precedent established in the natural world since the dawn of time.

Yes, love is blind among all animals, and same-sex partnerships are more common then you might be aware. The endless argument predicated on nurture versus nature has been an ongoing debate for man leading up to this historic decision. But, in actuality homosexuality is not a learned behavior as anti-gay rights movements have been adamant about trying to prove.

As far as homosexual percentages, every species is different. But according to a Global Animal report, about eight percent of rams are gay (and copulate with same-sex rams exclusively), a percentage very similar to that of humans.

The Oregon Health and Science University’s findings on homosexual rams revealed the “gay” rams to have visibly different brain structures than their ewe-wooing counterparts.

While almost 1,500 species of animals have exhibited homosexual behavior, sheep seem to be the most extensively studied and have “proven themselves out and proud, so to speak.”

The study goes on further to note that when it comes to homosexuality, it appears that every corner of the animal kingdom is in sync with these findings. Even the smallest insects from the mite to the Monarch butterfly have been outed. The elegant pink flamingo and scaly bearded dragon are both known to take same-sex partners, along with the Bluegill sunfish, emu, chicken, buffalo, and domestic cats.

Judgemental to a Fault 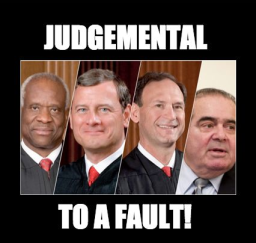 So by Chief Justice John Roberts and his fellow justices (Samuel Alito, Clarence Thomas and Antonin Scalia) not factoring 'sexual behavior in the animal kingdom' when they made their momentous decision this past week, it seems fairly obvious they really only looked at half of the evidence.

As the highest judges in the land, it seems remiss they didn't consider a precedent that dates as far back as 560 million years. What were they thinking? Certainly not, what's good for the goose, is good for the gander!

Dire Wolf -- The Prehistoric Animal Video of the Day!!!
Beware The Vampire Squirrel!
A Rescue Dog No One Wanted Saved A Family From Fire

Elephant Gets Hit By Train, 15 Of Her Pachyderm Pals Raid Local Area
Comments