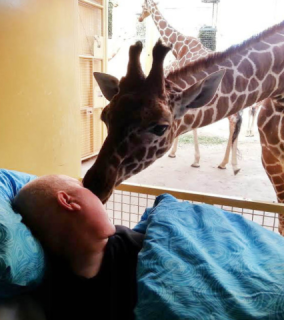 After a full career at Rotterdams's Diergaarde Blijdorp Zoo, Mario, a 54-year old grounds keeper asked to be transported
back to see his beloved giraffes one more time. Suffering from terminal
cancer, it was his dying wish that he reconnect with his friends before
passing on.

Upon arrival, in a heartbreaking scene, one of the
giraffes approached Mario and gave him what appeared to be a good-bye
kiss. Mario who was mentally challenged made a special connection with these
giraffes that spanned his 25 years of service, where his duties
included daily cleanings of the giraffes' enclosure.

It seemed as if the animal was trying to thank Mario for all of his years of dedicated work.

"These
animals recognized him, and felt that (things weren't) going well with
him," said Kees Veldboer, founder of the Dutch Ambulance Wish Foundation
who transported Mario to the zoo. In an interview, he told the Dutch
newspaper Algemeen Dagblad that the animal definitely recognized that Mario's health was failing. "You could see Mario totally light up -
it was a special moment - you saw him smile,"added Veldboer.

Photos
of the moment have since gone viral on both Reddit and the Ambulance
Wish Foundation’s Facebook page, where more 800 users shared the photo
as of Friday morning. Others have taken to Twitter to comment on the
moving image. 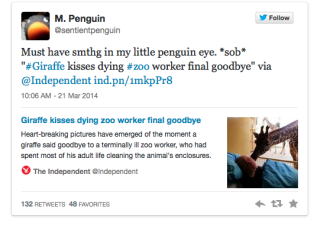 From
research, we know that giraffes are non-territorial animals who travel
in social groups- where it's been shown that they can form special bonds
with others in their herd.

At the Giraffe Manor in
Nairobi, it's common to see giraffes connecting with humans as well.
Famous for its resident herd of endangered Rothschild giraffes that live on  the extensive grounds of the manor house -- every day shortly before
9am, the mammoth beasts stroll up to the house and poke their heads
through the windows and doors in search of morning treats. 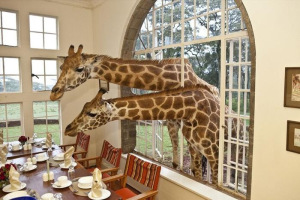 This
is one of the very few places in the world where staff and their guests can
share breakfast with the world’s tallest animals. Guests can feed the
giraffes from their breakfast table, photograph them and interact with
this graceful animal through the open windows or on the grounds.