Dogs are smarter than a lot of people give them credit for and their
observations of the humans around them can help them survive when
humanity seems to have given up on them. In Moscow stray dogs have begun 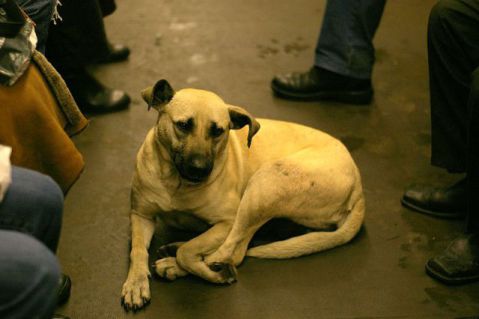 A Dog Traveling On The Moscow Subway (Photo by Adam Baker/Creative Commons via Wikimedia)living in the "suburbs" and hopping the subway each morning to commute to
the city to go to work.

Their work, of course, is begging and foraging for food. While on the train, like many commuters, they use the time to catch a few extra Zs. They listen to the announcements to make sure they get off at the right stop, occasionally reminding one another so that they do not miss their stop. They will find a seat and sit quietly like the other passengers until they reach their stop and then exit in an orderly fashion. This is not the behavior people expect of stray dogs. 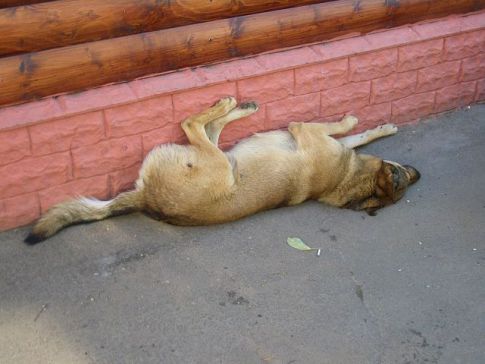 Moscow Street Dog Naps While Waiting For His Train (Photo by Vmenkov/Creative Commons via Wikimedia)While in the city they employ different techniques to get food from people including sneaking up on the unsuspecting human enjoying a bit of street food and then barking. The plan is that the human will be startled into dropping the food, giving the dog the opportunity to grab and run. With children they use the adorable factor -- placing their head on a knee and doing the soulful, big-eyed thing to get scraps from a sympathetic heart.

At the end of the day they board the trains once again to head back to the 'burbs, hopefully with a full enough belly to continue to survive.

The plight of these dogs does not go entirely ignored by the public. In 2001 a woman, on her way home with her dog, was arrested after she killed one of these strays with a kitchen knife because he had barked at her and her dog. She did this in front of a crowd of commuters, triggering a flood of public outrage. She was tried and received a year of psychiatric treatment. Funds were collected to raise a bronze statue of the dog at the train station he frequented and adopted as his territory.

The Moscow street dogs are not the first to use public transportation to survive, although they may be the largest in numbers. In 2006 it was discovered that a Jack Russell Terrier in England was hopping a bus to get to his favorite pub to beg for sausages. Then in 2011 a cat was discovered taking a bus to a fish and chips shop for a meal.

While the story of these stray dogs is amazing and weird, and even a bit bizarre, and while we applaud their intelligence and resourcefulness, it doesn't address the need to reduce the number of stray dogs.  Dogs have been bred for centuries to live with humans and need good homes.