At five times the size of your average little honeybee the Asian giant
hornet is one scary hymenoptera. A group of the giant hornets can
destroy a bee hive in short order and carry off the larvae and pupae to
feed their own young. 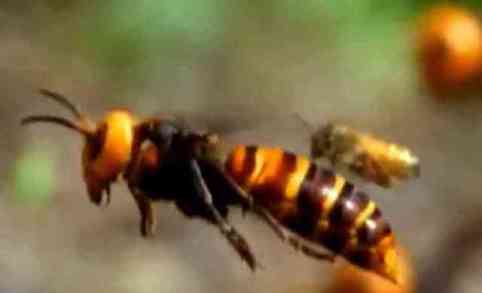 Asian Giant Hornet and Honeybee (You Tube Image) Lately these bad ass insects have been attacking
humans in China, causing serious injury to more than 1,600 and death to 42.

The sting of the Asian giant hornet contains a powerful neurotoxin that can kill. Even those not allergic to the venom are at risk, especially if there is more than one sting. The toxin destroys red blood cells which can cause kidney failure and ultimately death. For those with allergy to venom it can cause anaphylactic shock which can cause airway blockage and heart attacks.

The poison is delivered through a stinger that is about ¼" long. It is reported to feel like having a hot nail driven into the skin. In no uncertain terms that's going to leave a mark. 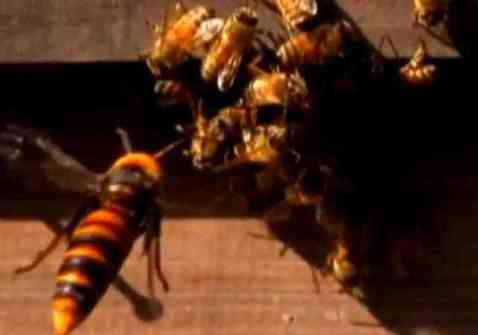 Asian Giant Hornet and Honeybee Hive (You Tube Image)The hornets have been especially plentiful and active this year in the Shaanxi Province in China. Just since July 1,675 people have been stung in three cities there, with 42 deaths and 206 still in hospital receiving treatment.

One woman, Mu Chonghui, was tending her millet crop when the insects descended on her. Once she was stung she could not move. She ended up with stings all over her legs. After 2 months, 13 dialysis treatments, and 200 stitches she is still in hospital and still cannot move her legs.

The increased number of giant hornets may have been caused by the unusually dry weather in the area this year. The arid conditions make it easier for them to breed. Urbanization may also be a contributing factor as more humans move into their habitat. The government has sent out police and locals to destroy the homes of the insects.  So far more than 700 hives have been destroyed.

One of the erroneous claims being made about these killer hornets is that they were actually created by the nuclear disaster at Fukushima. This is completely false. The Asian giant hornet has been around for far longer than the nuclear plant itself, let alone the meltdown. A funny story by the humorous website National Report was taken seriously and spread from there. In their story several of the mutant hornets had been killing people in Nebraska.

Unfortunately for the people of Shaanxi the hornets are at their most active during September and October. They do not go dormant until December.