Set, Match, Game on! Rufus, the Harris Hawk who keeps court at Wimbledon these days is in charge of keeping 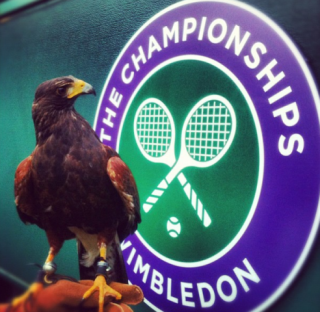 the skies and course clear of pigeons and their infamous droppings. This savvy predator knows there's nothing worse than having pigeons poop on the players - kind of puts them off their game!

In a recent interview with Timeout.com, Rufus was quick to point out that it's not just the players who work their balls off at the tournament, and that he thinks his contribution to the game is also significant.

When asked, what makes him so good at his job, it's said he stately emphatically: "Well, Harris Hawks are designed for weaving in and out of shrubs and woodland, so this means I can handle an urban environment like a pro. I can dodge everything – aerials, signposts and Boeing 747s – so flying between the courts and around the roof’s girders, seeking out pigeons who are trying their luck and attempting to roost, is a total breeze for me. I’m not a killer bird, however. I mean, I’m hard, sure, but I just let the pigeons know that The All England Club is my turf, you see."

At six-years old and weighing in at a precise 1 pound, 6 ounces -- one kilogram more is said to make hawks become too sedentary. Any lighter and he would cease to be the non-lethal deterrent Wimbledon contracts him to be, because he would have a tendency to roam farther afield seeking out mice, snakes or rabbits, instead of those dastardly pigeons.

It's a noted fact that Rufus's job is not all that taxing, however, since the mere sight of his 40-inch wingspan is enough to scare away even the more bolder pigeons. Becoming a celebrity in his own right, Rufus is becoming as famous as some of the players on the courts. He and his trainer Imogen Davis have also captivated the world's attention with this recent Stella Artois TV commercial.

Additionally, his popularity was given an additional boost by Rufus taking to Twitter and attracting almost 7000 followers (as of this posting.) And his tweets definitely indicate there is no love-loss between Rufus and the pigeons he patrols. 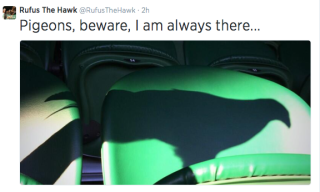 Wimbledon has been using hawks since 2000 to keep away England's significant small bird population that used to cause frequent interruptions of the games throughout the course of the last century.

This particular hawk is apparently also a fan of the tournament. When he was asked in that Timeout interview who he was betting on to win this year's Wimbledon title, he pointed to a couple of his favorites: "Well I was routing for Murray all the way, but after his quarter final bomb (NICE ONE, ANDY), I think Djokovic will sneak it. I can feel it in my feathers."

However he may be hedging on that bet -- with one other contender -- as the result of a recent tweet he just let fly 33 minutes before the posting of this blog! Now there's a celebrity who appears to be easily flattered!

Dogs Versus Lemons! The Animal Video Of The Day!!!