Robotic 'Spot' Can Fetch Your Slippers But Cuddling Is Out 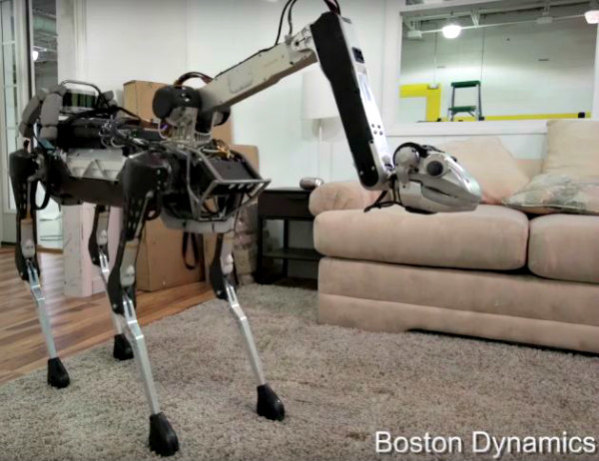 Robotic house pets? While not exactly a new concept (think mechanical songbirds, fish and remote controlled dogs) the new SpotMini by Boston Dynamics is a robot that can do your bidding for you housed in a body that resembles the skeletal frame of a Jurassic Park dinosaur before the skin or CGI is applied. Ridiculously cute, the little guy weighs a mere 55 lbs. and is run completely on electronic components rather than relying on hydraulics, like so many robotic designs do. This not only keeps the weight down, but it ensures a much quieter user experience when in operation.

With each passing year the world seems more inclined to want to introduce robotic servants, companions, or a combination of the two. While there is no substitute for the kind of love and companionship pet owners feel and receive from the relationships they experience with their pets, the SpotMini might be an ideal solution for folks living in circumstances where animals aren’t allowed. Besides the dinosaur comparison, once you see Spot in action you’ll probably agree that he (or she) looks like a dog in a cartoon placed behind an x-ray screen. It has four legs that bend just like a dog’s, so it can fall back on its haunches into the pounce position.

Spot plays fetch, but not in the traditional sense normally associated with dogs. A mechanical arm protruding from Spot’s neck has been capped with a head that includes a gripping action to pick things up and set them down. It’s said the creature can even walk underneath tables, just like a dog would, and navigate without bumping into things. From the video, though, it looks like Spot has trouble staying upright while trying to maneuver over wood and tile floors, just like real dogs do. Because the robotic arm is retractable, if or when he wipes out, you don’t have to worry about its head flailing about destroying your home or furniture.

Besides a really fun little robot, as robots go, the SpotMini might even make a suitable companion for pets left home alone all day, if they don’t freak at the sight of him and want to rip his electrical arm off or run and hide cowering under the bed or dresser. While it’s a distinct possibility initially, your pets might eventually warm to him and willingly interact. It would be too darn cute if they did. Chances are, if you got footage of it, it would go viral practically overnight. People eat that kind of stuff up.

If you’re curious about the company behind the SpotMini, Boston Dynamics designs and develops advanced robotics with what could be considered remarkable behaviors (for a robot, anyway) that include things like mobility, agility, dexterity and speed primarily by using sensor-based controls and computation. According to their Website, “Organizations worldwide, from DARPA, the US Army, Navy and Marine Corps to Sony Corporation turn to Boston Dynamics for advice and for help creating the most advanced robots on Earth.”

There's Something Fishy In Your Timing