Robotic GoBone Ensures Your Dog Will Never Be Bored Again 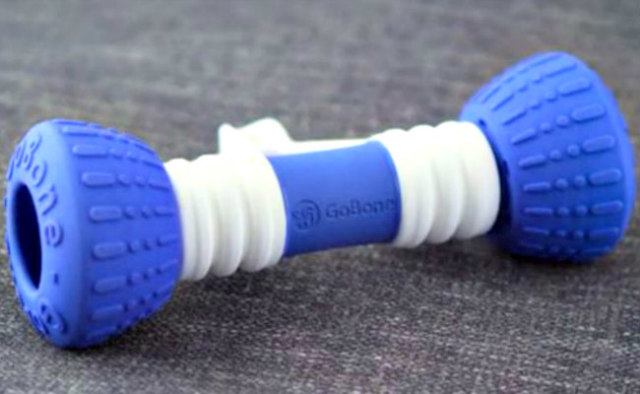 When many of us think of robotic toys we think of little space age robots like replicas of the B-9 robot in the ‘60s TV show Lost in Space or even the new Zenbo, the cute little family robot with the touch screen face that was unveiled recently in Taipei. That’s a huge misconception, because just about anything that moves through electronics can be considered a robotic toy. The thing is, they’re not just for people anymore. Sometimes called science toys for dogs, now there’s a robotic toy called the GoBone designed to keep your pet occupied for hours on end.

One of the benefits of the GoBone is that it can keep your dog active, which is a whole lot better than them sleeping all day while you’re gone. Not only is too much rest and not enough exercise unhealthy for them, but the excess energy often manifests itself in destructive behavior or bugging the heck out of you for attention when you get home when all you want to do is sit down and unwind after greeting them. Keeping them busy is in the best interest of you and them. That’s why this new toy on Kickstarter could really be a blessing. It rolls around and flips all on its own enticing your dog to chase after it and play.

The company behind GoBone is PulsePet, a consumer electronics company focused on technology for pets. They recognized the need for interactive toys with animals that are left alone all day. Some people work well beyond 40 hours a week. Even leaving a dog unattended for eight to nine hours a day, depending on your commute time, is a lot of time for boredom to set in. If you could keep them busy and entertained while you were gone wouldn’t you want to? Well, now you can. That’s because when GoBone isn’t being chewed on it’s busy attracting your pet’s attention so that they’ll get busy.

GoBone’s software can be controlled with an app to personalize the device for your particular dog’s size, age and activity level. The plastic bone is actually on wheels with a tab on the back. Once it’s set in motion, it’s kind of like when a dog or cat sees a lizard or an insect they’re determined to get. It’s the rapid movement that catches their attention and brings out their instinct to investigate and pounce. Once your dog finally catches the GoBone, it automatically shuts off, giving them an opportunity chew to their little heart’s content. Once they stop playing with it, it starts back up and rolls around again.

If you’ve got a smartphone, you can control the GoBone straight from your touch screen. The ability to tailor the product to your pet and to schedule times when you want the GoBone to be active are just two of the nice features this robotic dog toy has. You can also stuff them full of treats like a Kong and the parts are replaceable when your furry friend eventually destroys it from hours of play and chewing. Besides getting a PetCube to keep an eye on your pet, this is a good way to keep bored, mischievous scamps from getting into too much trouble while you’re gone.