The Rise Of The Jelly-Franken-Fish!

It is the stuff of science fiction -- or at least it used to be. Scientists from Harvard and Caltech have bioengineered
a jellyfish out of muscle from a rat's heart and silicon. Jellyfish in
the wild move more by pulsing through the water rather than actually
swimming, much like the beating of a heart. That is exactly the
direction that this bit of science and technology is headed. 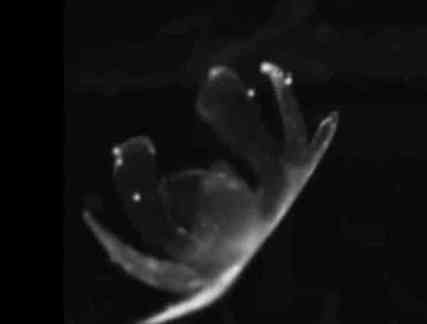 This "jellyfish" doesn't have any jellyfish DNA which makes it artificial, but still quite real. They have nicknamed it "Medusoid," which is derived from the subphylum name of the real jellyfish - medusozoa.  Both names are derived from the mythological Medusa.

The artificial jellyfish does not breed or eat, but has shown some feeding behavior in the way it swims. While it swims with the pumping-muscle action of a real jellyfish, it has its own distinctive appearance -- a flat, somewhat star-shaped design.

The Medusoid was created by combining the muscle from a rat's heart to act as the muscle of a jellyfish. The substance of the jellyfish, the "jelly" part, was replaced by a silicone rubber. They then grew it on a frame to give it the round shape and eight appendages. A small electrical charge was applied once it was in a tank of water, and away it went.

A Caltech doctoral student, Janna Nawroth, who is the study's lead author, has called the jellyfish a "pseudo organism." It is not actually "alive."  It is just some cells that have been electrified into movement that mimics life.

The Medusoid cannot think for itself, but will respond to stimuli, such as a bit of electric voltage. This basically means to contract or relax since the creature does little else. The organism also has a very limited capacity for self-repair or growth. The lifespan of one of these jellyfish is only about two weeks.

The reasoning behind such experiments is to hopefully one day transpose the technology to be applied to the human heart. In the future heart valves and pacemakers could be made from the cells of the patient's own heart. This would reduce the need for implanting hardware or replacing batteries. This could also lower the possibility of rejection since the parts would have been created from the same patient it was for.

The researchers believe that therapies along these lines will start to emerge in the next five to ten years. The next step at this point is finding a way to give the Medusoid a longer lifespan.

Fish
News Stories
Science
Technology
There's Nothing Like A Seahorse In Your Hair
Pyrosome: A Sea Creature That Is Really A Colony Of Clones
Gah! What Is This Monster?! The Animal Video Of The Day!!!
3 Great Ways To See Jellyfish
Comments