Three female white rhinoceroses at the Ramat Gan Safari Park in Israel
decided to begin the New Year by making a bid for freedom when no one
was looking. At about 6 a.m. on January 1st, Rhianna, Keren Peles, and
Karnivala chose to make a run for it when they found two gates
to their enclosure left open. Their adventure was furthered by a guard
that had fallen asleep. 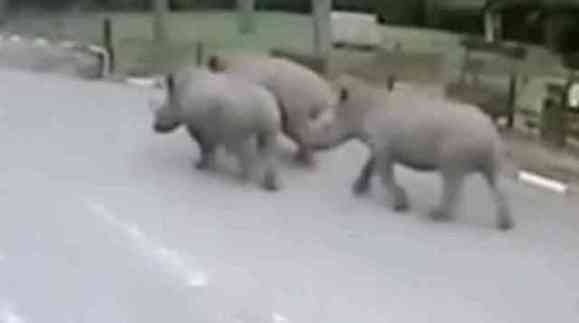 Rhianna, Keren Peles, and Karnivala make a break for it. (You Tube Image)

WhIle the rhinos were initially fortunate in the timing of their adventure, Safari CEO Yehuda Bar was quickly alerted to the escape and the location of the three ladies by local police. The police had been notified by passersby. The rhinos were playing in the parking lot, not far from the exit gate. He went running to help bring the rhinos back into the Safari and clapped his hands to get them to turn back into the zoo. Their freedom only lasted ten minutes.

The Tel Aviv safari-style zoo allows animals to roam freely in large groups on its 250-acre grounds. The trio of rhinos was returned to their usual routine. The guard who had fallen asleep was fired later that day.

Cute
Fun
News Stories
Wildlife
Sloths Go Mobile Just For You
PetsLady's Pick: Darling Diving Dog And Dolphins Of The Day
What Is a Pygmy Jerboa and Why Does It Look... Not Right? Animal Video of the Day!!!
The Paradogs of D-Day -- A Historic Tale
Comments