Rex the Dawg – The Robotic Farting Dog with Attitude

Just one look at Rex the Dawg's face tells you this isn't your ordinary junk-yard dog.   Besides his ruggedly handsome good looks, Rex has some major moves going on!   He can move his head,  ears, mouth and legs -  just like real dogs.   His eyes roll just like slot machines and he has a squeaky tail.  He has internal speakers, 9 motors and moves on wheels.  His infrared motion sensors located in his chest and legs, keep him from bumping into all sorts of  things. 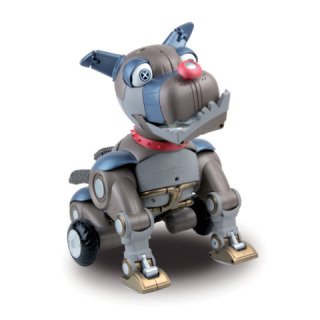 He has four distinct modes - Guard, Free Roam, Demonstration and Program mode.   Rex is quite the watch dog.  If anyone enters the room, you'll be the first to know.  But one of the coolest features he has is his honing ability.  Once he is programmed,  he will follow you where ever you go, just like a love-sick puppy.   Tired of the same old trick?  This little guy is able to store up to 80 new moves.  So you can teach old dog new tricks after all!   He also has different mood swings, which are programmed using the remote control. 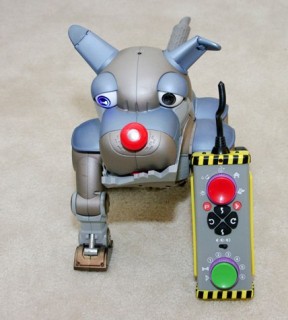 Although he means well, he is in definite need of some major puppy attitude adjustment training. He has a habit of inappropriate and down-right embarrassing behaviors at the most inopportune time.  Besides farting, sometimes he even acts like a cat!

This robotic pooch was developed by the folks at WowWee and requires 4 C and 2 AA batteries, which are not included.  He is recommended for children 8 and up and retails for under $50.

Sources and Photos:  WowWee and KidsTechReview

How Easter Bunnies Are Born
Up-Scale Your Love Of Chewbacca
Silver Spoon Sunday: The Benefits Of Bees
To Be Or Not Two Bees
Comments