Retired Racehorse Gives Human Artists A Run For The Money

It is not uncommon for a retiree to take up painting as a way to fill up
the hours of his or her golden years. It is if you are a retired
racehorse. Metro had been at the top of his career as racehorse Metro
Meteor in 2009 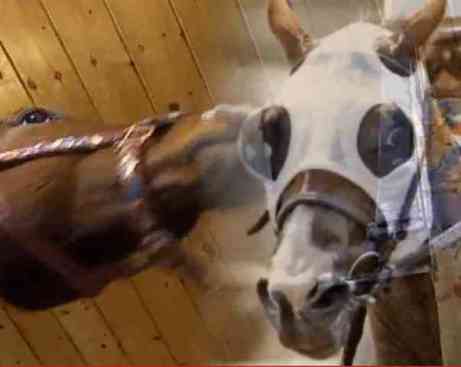 Metro painting while dreaming of former days of glory. (You Tube Image)when he was sidelined by knee problems. Life changed
drastically as he was adopted by an artist and his wife. It wasn't long
before he was no longer to do trail rides either. He needed something to
keep his spirits up. That was when his new owner, Ron Krajewski,
decided that a little art therapy was just the right medicine.

Metro's habit of nodding his head up and down fit right into the activity. The tricky part for Krajewski was teaching Metro to hold onto the brush. Once that was done the horse fell in love with painting. Granted he does need human assistance to load the brushes and hand them to him, but after that it is his sense of style and design that takes over. 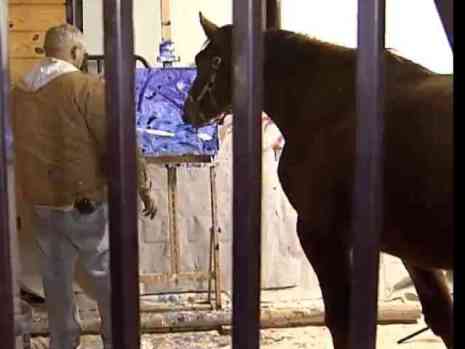 Metro and Krajewski discussing the latest masterpiece. (You Tube Image)These days Metro paints two or three days a week. He gets impatient if he thinks Krajewski is taking too long to set up the canvas and paint. He will paw the floor and nip at Krajewski to display his anticipation.

Metro's paintings are on display at a gallery in Gettysburg, Pennsylvania, on his website, and on his Facebook page. The paintings are selling well enough that Metro is helping pay his own bills.

When not painting, Metro likes to hang out with his friend Pork Chop, another retired racehorse owned by the Krajewskis.