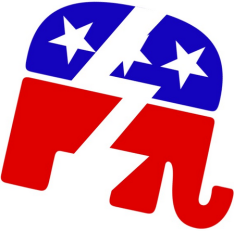 I know the title of this editorial is a bold question to ask, particularly from a blogger and cartoonist who has no political clout to make it happen. Nonetheless, in the name of animal advocacy, I would like to give voice to the voice-less — particularly where Donald Trump is concerned. It's a fact the presumptive GOP front-runner is only a handful of points behind Democrat Hillary Clinton nationally (well within the margin of error). That being the case, if this artful dodger of mayhem and discord were ever able to make it all the way to the White House, it's my belief the GOP establishment should consider retiring their iconic elephant as the official mascot of the party. In so doing, this action would become a stark acknowledgement to the United States citizenry and the world at large that perhaps this icon has outlived its purpose.

If an elephant representing the party of Lincoln and Reagan conjures up the image of a "big tent," surely those days have come and gone. Why? Because Trump's followers have not only never visited that tent in the past, they view that tent as symbol of an establishment they feel totally disenfranchised from.

No more Trumpeting for Trump 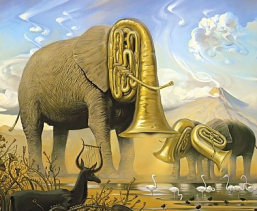 As elephants are highly intelligent creatures, they are among the most fascinating to observe when it comes to communication. When they choose to exercise their trumpeting capability, there is no denying them.

They create a very loud horn blast, which can be used to signify excitement, aggression, as well as danger dependent upon the circumstance. They can send their messages through their trunks at various frequency levels, depending on who they are communicating with — and it’s common for that iconic sound to be heard for miles.

It's a comparison that's fairly obvious at this point. There’s an image one conjures up visually between Trump’s bombastic bellowing at his rallies and elephants trumpeting in the forest. So much so — it just might be to his liking, if the GOP elephant was officially retired for good. After all, while 'The Donald' is quick to insult others, he's pretty thin-skinned when someone takes a pot-shot at him. So by allowing the GOP elephant an exit, the presidential candidate could deprive his opponents one less insult to levy against him in the future. 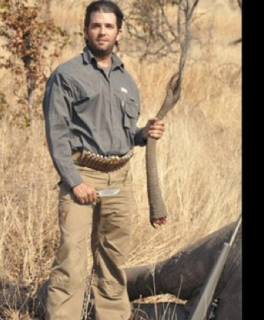 Donald Trump, Jr. & Elephant TailTrump’s sons, on the other hand, probably would not want to see the pachyderm depart from the GOP scene. In their primitive minds, they look at elephants as ‘target-practice,' or worse than that, something to be hunted, shot and bagged as trophies.

Both Donald Trump, Jr.,age 38 and Eric Trump, age 32 have traveled to Africa to hunt all types of wildlife, elephants included. In this photo, Junior Trump is seen holding the tail of the dead elephant lying beside him, according to a 2012 Examiner report.

When questioned on this travesty, both sons make no apologies for hunting wild game as sport. They don’t see anything wrong with killing endangered species. In fact, they justify their killings, by indicating they fed the meat to the indigenous people in various regions of Africa.

“Wrong Donald Junior. The hunting you do is 100% about killing — that is why you proudly posed with the killed animals. It is why you proudly held up a cut-off elephant's tail with the knife presumably used to dismember the animal. If it was truly about the sport of hunting, instead of the sport of killing, then hunters would employ a strategy similar to the recreational fishermen who catch and throw back,’” noted Williams.

So the Trump boys’ cavalier attitude begs the question: If they don’t respect the life of an endangered animal, than the Trump Family doesn't deserve the elephant that represents that party? 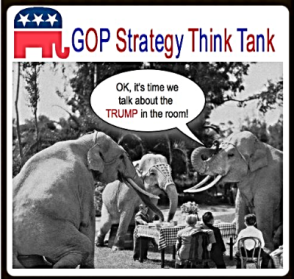 Award-winning documentarian Paul Boorstin took a different approach as to why ridding the elephant from the GOP party should be considered. Using satire instead of a rifle as his weapon of choice, he wrote an open letter to the Chairman of the Republican Party in a Huffington Post article —  as the GOP elephant.

“As the official mascot of the GOP, I hereby revoke permission for my image, including photos of my trunk, tusks or either of my ears — or those of any of my fellow pachyderms — to be shown on your campaign buttons, posters, T-shirts or coffee mugs,” mocked Boorstin.

“When it comes to the Donald, I’m sick and tired of being the elephant in the room. I refuse to end up as part of his slick, gold-plated shtick."

And so I lift my trunk to trumpet my resignation. I’m outta here. Time for the GOP to rebrand with another mascot! Okay, the donkey is taken and so is the bald eagle, but what about the pig? On second thought, scratch that idea: I’ve been told that swine are intelligent animals, 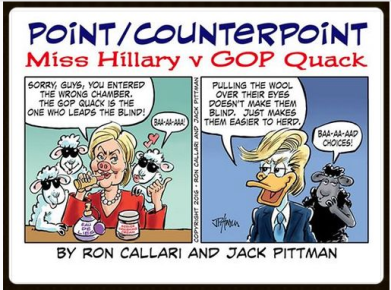 And as you can see from this cartoon, I also believe pigs have too much intelligence to represent the GOP party.  The animal for consideration for Trump's new brand of Republicanism should be something like a 'sewer rat'  — but wait, that's a rather harsh depiction of creatures  considered survivalists who toil daily for their next meal.

Perhaps a 'laughing hyena' would be much more akin to Trump's personality traits? Rude, boisterous, manic, gnarled teeth-mashing — like Trump — they spend a lot of time pushing and shoving those they feel superior to, while laughing at others, just because.That's kind of apropos, don't you think? — who seconds that motion? Motion passed?

2015, Watershed Year for Animal Rights
An Elephant To Keep Your Files In Order
Get Mugged This Easter
Comments