Resurrection Biology For Those Who Think Extinction Stinks!

It sounds likes a science fiction plot line, or a novel penned by Stephen King. However in actuality, the science 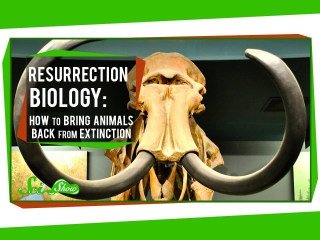 called 'Resurrection Biology' or 'De-extinction' has been in development for years by scientists who are becoming more and more proficient at understanding the intricacies of DNA.

Today, we know that research has determined DNA can remain in tact for up to 6.8 million years. So bringing back extinct creatures like dinosaurs would be impossible -- since they roamed the planet over 65 million years ago.  But while we'll never be able to create a Jurassic Park, much to the chagrin of Steven Spielberg, there's others that might get a second chance at life.

For instance, in the case of the 'Woolly Mammoth' - they definitely might have a better shot, since the last mammoth to have walked among us - did so - only 4,000 years ago.

Narrator Hank Green from the SciShow -- which is a science news and history show on Youtube -- explains the latest research into this field of biology, while pondering the larger questions of "Can we?" and "How do we?" but also, perhaps more importantly: "Should we?"

As Green noted, cloning at the moment seems like the most likely path to bring back extinct forms of life. And to the end, one likely candidate is the potential resurrection of the Pyrenean Ibex. With this species, scientists have managed to collect and save cells from these wild horned creatures before the last one perished in the year 2000.

As shown here, the job is first to replace the nucleus in a goat egg (the closest nearest relative to the Ibex). This is followed by using chemical and/electricity to reconfigure the DNA. Then this "fertilized egg is grown a bit, placed in a surrogate mother goat - and then -- cross your fingers (drum roll please) -- the species will be resurrected!

Back to the case of the Wholly Mammoth. As Green pointed out in the above video, elephants (the most likely candidate to house the embryo) is a much smaller animal. This means the mammoth baby might be too big for a Momma Pachyderm to deliver naturally - and a very difficult C-section might have to be worked into the equation. Not impossible, but it might take 100s (maybe even 1000s) of tries to perfect a successful birt 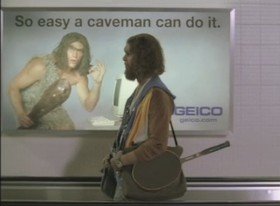 Plus, from a life-balance perspective, is it really important to bring back the mammoth? What purpose would it serve? Maybe, their extinction makes sense in the grand scheme of things. After all, man's evolutionary ancestor, the Neanderthal walked the earth only 400,000 years - yet do we want a population of those guys a la that old Geico TV commercial to be competing with us for jobs, food and shelter? And what about a seat on the plane?

The Very Strange Animals Video Of The Day!!!
Comments