A Rescued Crow Has Chosen Life As A Pet

We all know someone out there who is against keeping wild animals as
pets. It is a controversial issue as more and more states are limiting
or outlawing keeping wild animals. But what if that animal has chosen to
stay with its human family of its own free will? The Renaud family of
Ottawa, Canada, has found themselves in just such a position with
Walter the Crow. 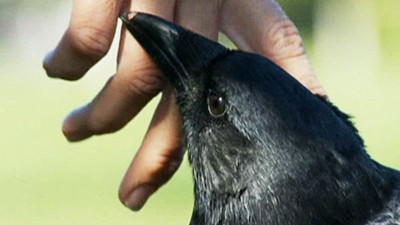 Walter the Crow (Images via You Tube)

The Renauds found an injured baby crow all alone at the side of a bike path. Even though their family already included two cats, they decided take it home and nurse it back to health. They named it Walter to save them from just calling him "It."

Under their diligent care Walter was soon able to fly again. Their plan had always been for him to return to the wild and his own kind. In the meantime, Walter apparently had decided on other plans and hadn't let them know.

When they tried to get Walter to leave their nest, he wouldn't go. He had decided that they are his family and he seems determined not to let anything change that. He is not caged. He is free to come and go as he pleases, and he mostly feeds himself. Still, he never strays far from the Renaud house. 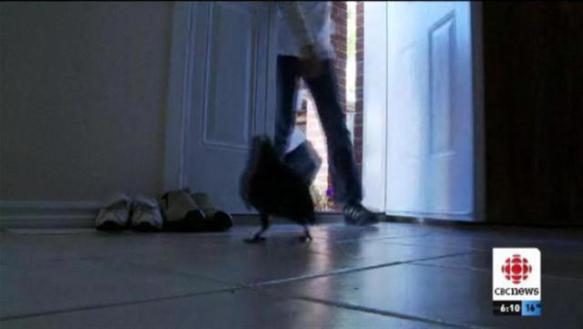 Walter the Crow (Images via You Tube)

Crows have been shown to have the ability to recognize individual humans visually, and to communicate information about "bad" humans. In many cultures, crows are associated with and symbolize death (probably from their associations with eating vital grain crops and imbibing in carrion). In this case Walter is more like the life of the party.

When school started he began accompanying mom and the kids on their walk to school. That was when they realized that he really did consider himself a part of the family and had every intention of staying with them.

He hangs out in the trees during school and swoops down to play with the kids during recess.

Daughter Livia and Walter seem to be particularly close, going on bike rides together and having heart to heart talks. Livia tells him the stuff she feels she can't tell anyone else. And apparently Walter is pretty good at keeping secrets. 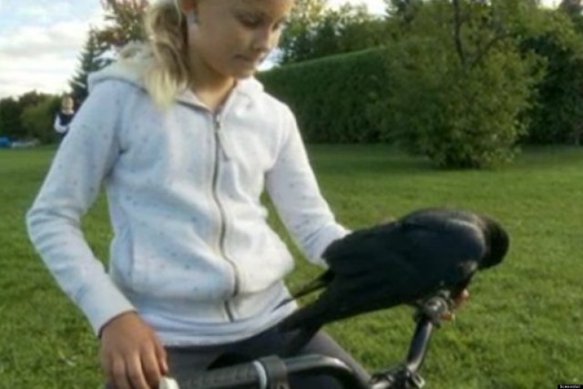 Walter the Crow and Livia Renaud (Images via You Tube)

"One day I wasn't feeling that great and I was on the couch, and he flew in through the back door and he came and he sat on the couch. And he snuggled under my arm and we were watching TV together, so that really made our bond stronger," Livia said.

Her brother, Zachary, commented "He's like another child in our family!"

How many chances would there be realistically for any kid to have a crow for a brother -- and a damn good one too.

PetsLady's Pick: Cute Hanukkah Budgie Of The Day
Was This Weasel On Back Of Woodpecker Photo-shopped?