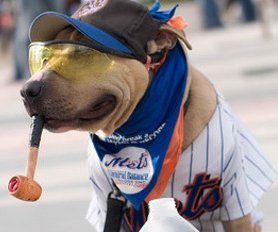 wasn’t due to lack of support from its fans . . . namely those of the canine variety. Rescue and shelter dogs, along with pet owners were appropriately dressed in New York Mets garb to parade ceremoniously in Manhattan. This was a celebration to kick-off the start of the World Series, and was co-sponsored by the Suffolk County SPCA and Rescue Dog Rocks to promote pet adoption.

Animal rights activist Jean Shafiroff was the host and organizer of the first-ever New York Mets World Series ‘Puppy Parade.' Up against the Kansas City Royals, this line-up of amazing New York pooches trotted along city sidewalks with pride, hoping to find a new home while rooting for their favorite home town team.

The ceremony kicked off at Shelter Chic, a small shelter in lower Manhattan, where a collection of long-owned and still-homeless pups gathered along with two-legged representatives.

For at least an hour, the dogs walked up and down Chambers Street and Broadway in Manhattan's Tribeca neighborhood, accompanied by the volunteers and members of the SPCA. Each dog was outfitted with a different type of Mets apparel, from orange tutus to jerseys, and nearly all of them were up for adoption.

Jean Shafiroff & FreddyJean Shafiroff who is the proud owner of her best friend, Freddy said: “On a day like today, the animals are forgotten, because everyone's thinking about the series — we're expecting 20% fewer adoptions today, so we came up with the idea to have a parade to honor the Mets and show off our little dogs.”

Rescue Dogs Rock NYC, a charitable organization that brings in dogs from shelters around the New York area, provided all of the eleven dogs for the parade. The organization has saved more than a thousand dogs in the eight months since it was founded, and specializes in pit bulls, a breed that Shafiroff believes gets unfortunately a bad rap.

Only one slight hiccup occurred during the first-time event, when the parade was briefly held up for "Maui," a black and white pitbull, who had to stop to take a bathroom break.

Oh well, when nature calls, even parade dogs should be alloted the latitude of ‘taking care of business,' don't you think?

And here's hoping that this parade is a good omen so these dogs can celebrate once again, when the Mets take the pennant? Any wagers, my pet-owning NY & KC readers?

PetsLady's Pick: Funny Ranch Dog Of The Day
The "What did I do last night?" Animal Video of the Day!!!

Give Your Dog A Bone Trim

Could Peter Venkman Be Correct? Is This the End of Days? The Dog and Cat Living Together Animal Video of the Day!!!
Comments