While two jail mates continue to be on the loose after masterminding a prison break in upstate New York, an emu 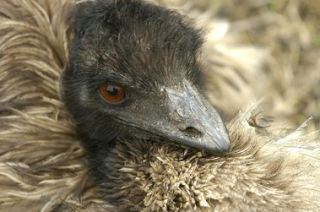 has followed suit in West Michigan. However differing from the Clinton Correctional facility escape, this one doesn’t look like an inside job. Acting on his own, the feathered escapee busted loose from an enclosure outside a Grand Rapids area home owned by Mary Tasma.

Tasma, 84, told the press this week, while she still had no idea where the animal might be, she knows one thing: The runaway bird will have to be shot if it is located. "There's no way you can catch it or corral it," said Tasma, who has raised emu for two decades.

Emu are known to run as fast as 30 mph. They have long nails they will use as a defense mechanism if they feel threatened. Tasma suspects the bird used the claws on its feet to latch onto the chain link fence and climb it, falling over to the other side. She has seen it happen before. But no matter how high she has the fence, the birds always seem to find a way out.

One Facebook user asked, "Why can't they tranquilize it?"

Commenting on the story, reader Reality said, "Shame on these people." 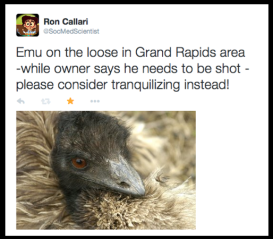 Take a lesson out of Atlanta PD's playbook . . .

Last month, drivers might have mistaken it for an ostrich when an emu cause a highwat traffic jam in metro Atlanta, Georgia. The Atlanta Journal-Constitution reported that authorities in Douglas County received calls about a big bird running around Interstate 20. Douglas County sheriff's Lt. Glenn Daniel says the emu had gotten loose from a private owner who lived nearby.

Several deputies corralled and captured the flightless bird. Daniel says it appeared to be scared but was not 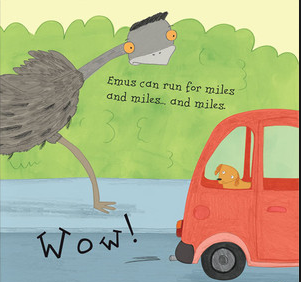 injured and was returned to its owner safe and sound. So, there you have it Ms. Tasma, your emu does not have to be shot. With folks that know how to handle frightened animals, there are ways to bring him home safely. With his resemblance to Sesame Street's fictional character, Big Bird, I think there would be a lot of tears shed by young and old, if he met that horrific type of ending.

Share your outrage on social media as well if you agree . . . please!

Did 'Bird Brain' Da Vinci Get It Wright?
Comments