Red Hawk Down: Bird Of Prey Grounded By Large Meal

The trouble began when a juvenile red-tailed hawk caught a coot for his
dinner. It must have been a particularly tasty coot or perhaps the hawk
had just gotten too hungry in the pursuit. At any rate, the hawk 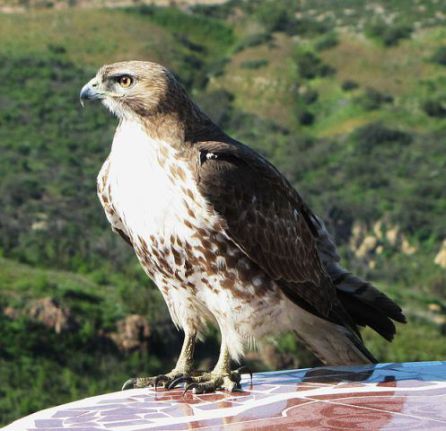 Red-Tailed Hawk (Photo by Davefoc/Creative Commons via Wikimedia)finished eating, moved several feet away and collapsed. Photographer
Steve Shinn discovered the bird too full to fly, or even move, lying on
its back just outside a nature preserve near Long Beach, California.

Shinn called South Bay Wildlife Recovery, an organization that works with raptors, to come and help the bird that was in such obvious distress.  He kept an eye on the hawk while rescuers were on the way. The bird was collected and taken in for a bit of rest and rehabilitation.

The next day the hawk was sitting on a perch like nothing had happened to it. Once experts are certain that the bird has fully recovered he will be released back into the wild.

The incident does beg the question, how much will the hawk have to pay to have any embarrassing photographs destroyed?

Add More Spooky To Your Halloween With Batty Snow Globes