In early December a herd of deer in Suffolk, England passed close
by a herd of sheep. Somehow a juvenile buck got separated from his
family herd and has apparently been adopted by the sheep. He eats, 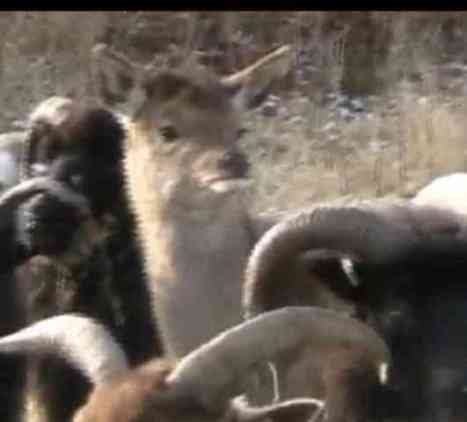 Red Deer With His Adopted Sheep Famiy (You Tube Image)plays, and sleeps with them, and has even made a few close friends among
the herd. You might say that he has taken to acting "sheepishly."

The shepherd of the flock, Andrew Capell, says that he has never seen such a thing, but the sheep seem to have accepted the deer as one of their own. The deer comes and goes as he pleases, hopping back and forth over the fence when he need some alone time.

The U.K.'s National Trust, a charity organization, is keeping an eye on the little buck and his safety. They hope that he will one day return to his own herd when, and if, they pass through the area again.

Panda Play! The Animal Video Of The Day!!!
Comments