Red Nose Day Goes To The Dogs In The USA! 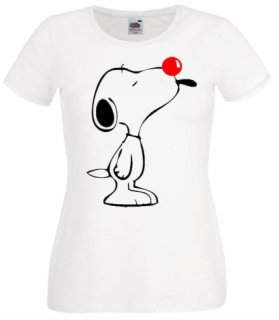 Over the years, Red Nose Day has earned a solid and well-deserved reputation for having “fun” while “fund” raising for children and the disadvantaged globally. Organized by Comic Relief the event takes over the U.K. every two years for a few days in March, where tomfoolery of all sorts becomes the goal of tens of thousands. So much so, that more than a billion pounds has been raised over the last 30 years.

But what about us folks in the U.S. & our dogs?

Why have we been overlooked? After all, affixing a “red nose” to a master and his best friend’s face is a sure bet for bringing a smile to anyone’s face.

Well to that end, the Yanks on this side of the pond are rising to the occasion for the first time. The folks at Comic Relief, NBS Universal, Walgreens and M&Ms are working overtime on a campaign that will culminate in a three-hour TV special on May 21.

Since Walgreens is the only retail outlet where you can actually buy an authentic red bulbous nose, inventories are being diminished rapidly, and at some locations actually sold out.

Which means in the case of our dogs, you might want to look for some other methods of make-shifting their red noses. There are a number of ways you can accomplish this, by the following the lead of the Brits.

For instance, knitwear designer, Ros Badger and jewelry designer, Emma Mitchell have been successful over the course of the last few years in creating not only knit red noses, but also actual doll-like replicas of their pets. As you can see here, stuff-animal Chip’s nose can easily be removed and placed on the real-life dog, particularly after he gets a load of his doppelgänger.

A Nose for Business

SMBs and brands of all types can also get their dogs involved in Red Nose Day. In 2009, Churchill Pet Insurance seized an opportunity when they realized their ‘bulldog’ logo was a great candidate for a red nose. They also tied this into their own Red Nose fund-raising campaign, where with every Churchill insurance policy sold over the course of that year, the company would donate £1 to Comic Relief.

Born in the USA

Red-nosed Ron CallariWhen I learned of the U.K.’s annual fundraiser Red Nose Day coming to America for the first time, it stirred my patriotism and creative juices. First came a YouTube video production where I parodied the song lyrics, “You Give a Little Love” from the 1976 musical film, “Bugsy Malone," to make them a little more Tsu-esque.

I then used a clip from the movie that I felt best underscored the levity of Red Nose Day. Since Comic Relief is the origin of this fun fund-raising event, it seemed only fitting to add the element of pie-in-the-face humor and why not include a dog as the target. See if you don't agree?

Then I approached an artist on the new social network Tsu, who hails from England and goes by the name @ADogADay. Known for actually creating and publishing cartoon illustrations of more than one dog per day on Tsu and Facebook, I asked my friend if her artistic talents could affix a red nose to one of her dogs and position him in the direct line of fire of a flying pie to the face. The iconic image that resulted became a logo of sorts for 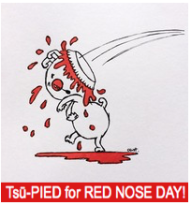 From there, we established a separate Tsu account with the handle, ‘TsuRedNoseDay’ and asked  the network's founder, Sebastian Sobczak -- if we ran a charity raffle -- would he officiate? In turn after receiving his approval, @ADogADay graciously offered to donate the original ‘pie-in-the-face-dog’ sketch to be used as a special prize for our fund-raising event. The winner will be picked at random by Sebastian, on June 1, 2015.

Nwo similar to real pies being thrown in people’s faces -- for all those who liked our campaign posts -- they ran the risk of receiving a virtual pie being thrown down on their profile page. To date, we are happy to say, there’s been hundreds of pies literally splish-splashing their way across the ecosystem.

Rules to enter the raffle are simple. Users can make a peer-to-peer transfer of money by clicking the ‘Transfer 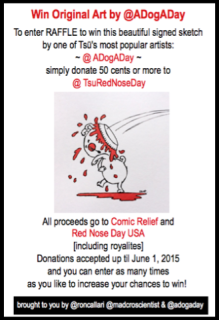 Funds’ button and sending a minimum of 50 cents to enter the raffle. Multiple donations of 50 cents become multiple entries [ e.g. $1.50= 3 entries.] and increases a user’s chance of winning.

So as you can see, in essence this campaign has helped America go to the dogs for Red Nose Day USA. And from where I sit, I'm hoping other dog-lovers will follow suit.

If you’re doing something funny or unique for your dog this Red Nose Day, please comment below. And if you’d like a fun way to donate to America’s first Red Nose Day while getting hit with some virtual pie-in-your-face, feel free to visit us at Tsu, before the campaign dog-gone closes on June 1, 2015.

Cats And Dogs Meet Babies For The First Time -- The Animal Video Of The Day!!!
Comments