The Rocky Mountain Raptor Program reported last month that there had
been an increase in the number of hawks getting hit by cars in Colorado,
especially in one area of Weld County near the Pawnee National
Grasslands. The 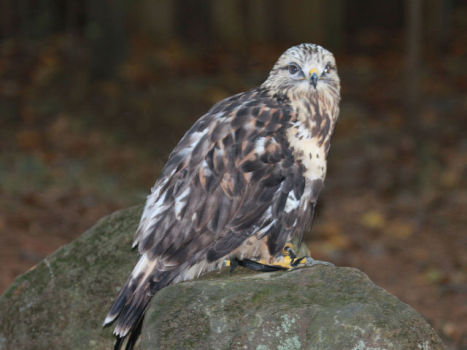 Rough-Legged Hawk (Photo by DickDaniels/Creative Commons via Wikimedia)program picks up the injured hawks and puts them into a
rehabilitation program to eventually return the birds to the wild.

During the winter months things are usually pretty quiet. However, this year has been different. In December they took in a record ten hawks into
the program -- seven of which were rough-legged hawks. Normally the program only sees three or four of the hawks a year.

The rough-legged hawk summers in arctic and subarctic regions around the world and fly south during the winter months. They are also one of the few raptors that are able to hover.

Rehabilitation coordinator Michael Tincher keeps track of where the birds are picked up and has found that this one area has a significantly higher rate of injured birds. Every year they get calls about birds injured on or near oil and gas wells or wind turbines and this is now an issue that is apparently expanding. The traffic corridors to and from these sites seem to be part of problem. 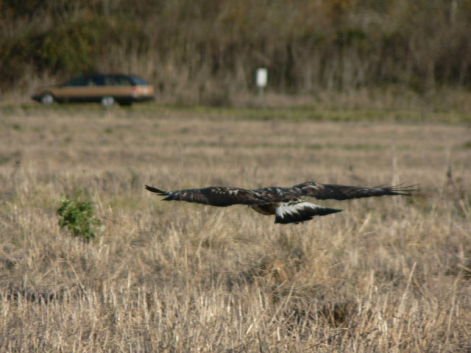 Rough-Legged Hawk Hungint (Photo by Walter Siegmund/Creative Commons via Wikimedia)When energy development is planned they do environmental impact statements on where the operation itself will be placed, not on what it will take to access the area. The wells and turbines are often a dozen or more miles from established main roads.

Many species, like the red-tailed hawk, have managed to adapt to these changes in their habitat, but for some reason the rough-legged hawk has not managed to follow suit. These hawks migrate south from the Arctic every winter and are not accustomed to heavy population areas and traffic. This undoubtedly creates confusion for the birds since their hunting style is to fly low across the ground in level grasslands in the north where there is little to get in their way.

There are other factors at play as well. The bitter cold this year has moved the birds further south, and most of the birds that they have rescued have been the inexperienced youngsters.

Whatever the cause of the rise in injuries, it is creating a strain on the Rocky Mountain Raptor Programs resources, both financially and in terms of personnel. The non-profit organization is still only gearing up for the busy season ahead and instead they are dealing with a large number of injured birds..

You'll Be "Raven" About This Wristrap!