Rebecca The Raccoon: A Thanksgiving Story

Turkeys are not the only animals to have been pardoned from the
Thanksgiving table by the President of the United States. During the
Coolidge administration (1923-1929), the town of Peru, Mississippi, sent
a raccoon to the White House with the idea that the animal would be
prepared for Thanksgiving dinner. However, once 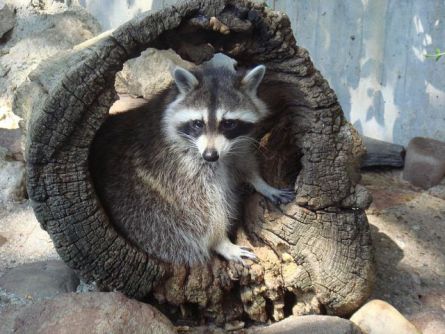 Raccoon (Public Domain Image)Calvin and Grace met the
animal, her little life was spared and she became a part of the family.

The Coolidges were well known for being crazy about animals and had quite the menagerie in the White House. Once they discovered that the raccoon was more domesticated than wild they took her into their hearts and named her Rebecca. They had a house built for her in one of the large trees with a fence built around it for Rebecca's protection. While she was outdoors she was kept on a leash. While she was indoors she had the run of the First Family's residence. Calvin was known to walk about the house with her draped around his neck.

For her own safety, Rebecca was eventually donated to the nearby Rock Creek Zoo. During the Coolidge administration Rebecca was not the only exotic pet given to the family. Other exotic pets included a black bear, lion cubs, a wombat, a duiker, a wallaby, several Pekin ducklings, and a pair of rock bass. These gifts often arrived as pets, but were sometimes meant to be served up for dinner.

While most of us can't stomach the thought, raccoons are sometimes eaten at the
holidays, usually through areas in the southeastern United States where they are considered a traditional delicacy. The animals were eaten by early American settlers and Native Americans.

Thrill Your Cat With Catnip Bubbles