Raven Makes A Point Of Asking For Help With Porcupine Quills

In one of Aesop's Fables a mouse removes a thorn from a lion's paw and
gains the eternal gratitude of the giant cat. Many versions of this tale
have appeared periodically over the centuries. While it may be a tale
of fiction, real life tales keep cropping up of wild animals approaching
humans for help when in a dire predicament. Last month it was Gertie
Cleary's turn when she helped out a raven that had been impaled on several porcupine quills. 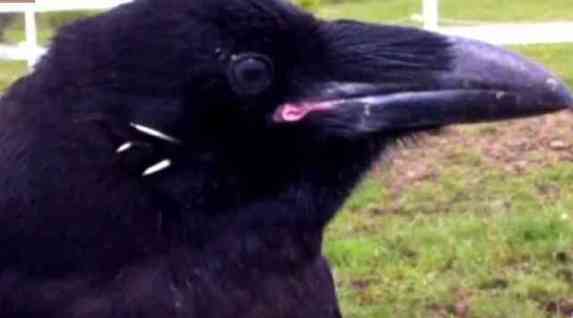 Cleary was outside on her family's Nova Scotia farm when the bird landed on the fence near her and demanded her attention. When she looked she noticed that the bird was in pain from the porcupine quills in its face and wing. In many of the articles online about the incident reported that the bird had a face "full" of quills. The truth was that there were three quills in the face and just one in the wing. 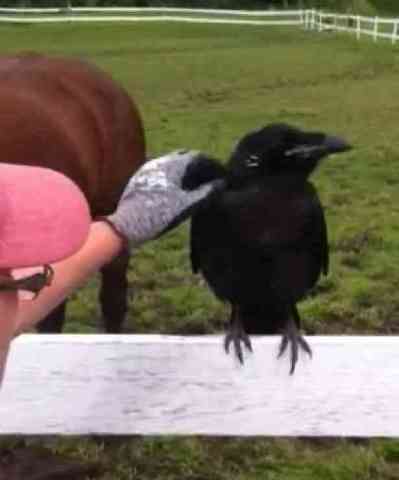 Cleary Goes in to Remove a Quill (You Tube Image)

While her daughter filmed the encounter, and sporting a pair of gloves, Cleary approached the raven cautiously (as one always should if one is crazy enough to approach an injured wild animal), speaking gently to it, and stroking its unaffected feathers. Then she moved in and plucked one of the quills from its face.  The bird squawked loudly, but did not leave. As she went in for the next quill the bird tried to give her a nip as though warning to be gentle. She calmed it for a moment again and got the second and then the third.

The video ends before she goes after the quill in the raven's wing, but Cleary admits that she did it so vigorously that she accidentally knocked the bird off the fence. Her avian patient, now named Wilfred, hung around for a day and enjoyed a recuperative feast of dog food, canned tuna, and water.

Cleary likened the raven's reaction to the quill removal to that of a child having a splinter removed -- noisy and nervous. For the bird not getting help could have been dire as the quills could have led to infection and eventually death. Experts advise that it is better to contact local animal authorities to report the injured animal rather than try to handle it yourself. Injured animals can be unpredictable and dangerous.

While this was hardly Poe's tale of the raven, if this one could talk it would probably say of encounters with porcupines: "Nevermore!"