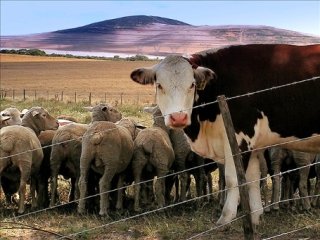 Cattle ranching hit hard by drought: image via kstp.comCattle inventory is the smallest this year than it has been since the U.S. Department of Agriculture began keeping records in 1973. Ranchers have been selling off their cattle because the recent droughts have destroyed crops and driven up the cost of food and water for their cattle.  It's too late to fight climate change.

So ranchers, and farmers as well, are exploring new species and new technologies to produce drought resistant animals and plants.  Cattle are being bred to withstand heat and sustain themselves on lower quality feed; many cattle are being bred with genes from breeds that survive in the heat of Africa, India, and the Virgin Islands.

Ron Gill, a rancher and professor at Texas A&M's department of animal science, told the Detroit Free Press that he is telling people, "Regardless of what you have to buy to restock, your future breeding programs need to target this new normal and re-establish a different paradigm than what we've had in the past."

Of course, farmers need to approach their crops in an equivalent manner by creating more drought resistant plants.  Food scientists are focused on corn right now, growing strains with larger roots to absorb more water and fewer leaves, which release too much water.

Particularly interesting is the study of 'resurrection plants' like ferns and mosses that dry up while deprived of water and spring to life when it finally rains. If the particular genes responsible for their quick recovery from drought can be isolated, then perhaps those genes can be used to prolong the lives of other plants that are water-deprived for a long time.

In any case, it seems that the conditions of the last few summers have had such a major impact on food producers (and consumers) that they are in a race to control conditions that were rapidly getting out of control.