Let’s say you’re jogging in a marathon and you see a 1,500lb bison in the path. Do you go well around the behemoth? Or do you try to annoy the beast so that it will wander off into the wilderness? If you choose the latter, you’re going to have a bad time…

Late last March marked the 2013 Antelope Island Buffalo Run at Antelope Island State Park, Utah, where runners took part in the yearly 100 mile run alongside the 500 American bison living on the island. This year, a large bull bison lingered close to the main path, which led one man to try and shoo it away.
While the victim claims that he merely waved his arms at the bison, others claim that he had yelled and thrown rocks at the bison. Either way, the man was violently slammed into a fence after getting the animal’s full attention.

The bison walked away after the initial ramming, leaving the man to escape with only minor injuries. Park officials have decided not to charge him with bothering the wildlife, saying that he had suffered enough.

Unfortunately, people just don’t seem to understand how fast, strong and dangerous bison are. Do these folks feel safe because bison are bovine in appearance? At any rate, here are a few more videos showing how foolish some nature enthusiasts can be:

The American bison can weigh up to 2,000lbs, and can run 30 miles per hour. The near-threatened buffalo is distributed throughout the western United States, Canada and Alaska. Although an alert bison herd is a formidable force to be dealt with, they are occasionally prey for wolves and grizzly bears. 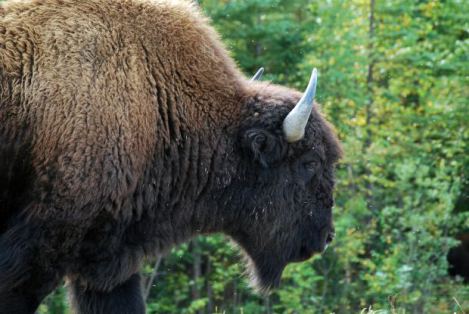