Florida is no stranger to invasive, non-native species, especially when
it comes to the Burmese python. There are an estimated 150,000 of the
snakes living and hunting in the Everglades and surrounding areas. With
no 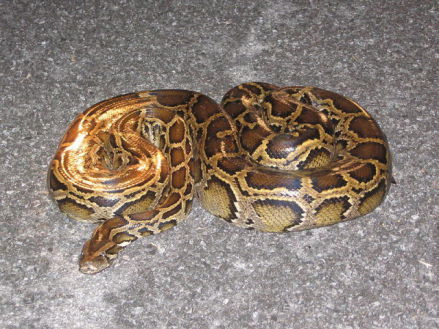 Burmese Python in the Everglades (Public Domain Image)natural predator in the area they are decimating the native wildlife.
On Saturday the state started a month long python hunt event to help
curb the spread of the species.

The 2013 Python Challenge started on January 12 in an effort to create public awareness of the snakes and their danger to the ecosystem. Nearly 500 hunters have signed up for the month-long event sponsored by the Florida Fish and Wildlife Conservation Commission. The Everglades have become so over-crowded with pythons that the snakes have begun slithering into surrounding neighborhoods looking for newer habitat. In these areas they largely hunt cats and small dogs.

Burmese pythons are native to Southeast Asia. It is believed that people who owned the snakes as pets and no longer wanted them simply set the snakes free. The pythons found an overly-friendly environment in which to thrive.

Current Florida law bans the sale or possession of the snakes. A new federal law has outlawed the importation and interstate sale of them.

The challenge will end on February 16 with an awards ceremony.