Pyrosome: A Sea Creature That Is Really A Colony Of Clones

There are many strange creatures in the sea that seem more alien than
earthly. The pyrosome is one of them. Well, actually it is many of them.
Each long, tube-like pyrosome is actually a colony of hundreds, or even
thousands, of tiny animals called zooids. They come together in an
outer "tunic" that allows them to join together physically into a single
unit. The colony can grow to be several yards long and two yards wide. 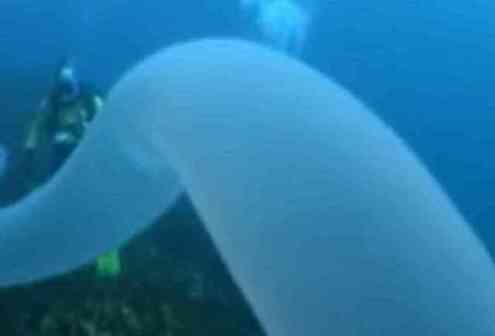 That is large enough to be able to suck down a fully-grown human being. Fortunately nothing that large is on the menu for a pyrosome. These colonies are one of the many creatures that subsist by filtering plankton from the water.

They live near the surface of the ocean in the warmer waters of the planet. They are translucent gentle giants and live in colonies as large as 100 of the marine animals. The creatures are also bioluminescent so that they emit a bluish-green light.  Sailors have reported seeing the water filled with the creatures on dark nights. In fact their name comes from this trait -- from the Greek "pyro" meaning "fire" and "soma" meaning body. 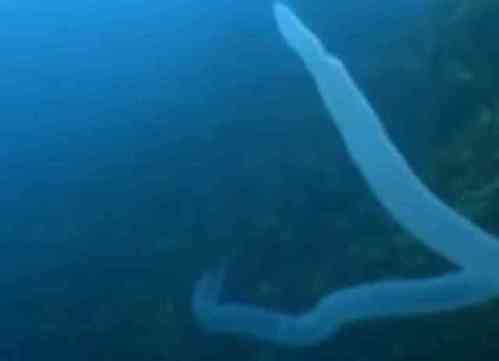 Pyrosome (You Tube Image)Pyrosomes are fairly rare, so a sighting among marine enthusiasts is cause for excitement. They are rare enough to be called the unicorn of sea creatures. They use a form of jet propulsion to move slowly and constantly through the water.

The outside of the tunic is smooth, while the inside is a bit bumpy with the many individuals. To the touch the pyrosome is said to feel like an extremely soft feather boa.

Fish
News Stories
Science
Weird, Odd or Bizarre
There Is Something Fishy About These Sandals
Give Your Valentine Some Narwhal Love
Well, Son Of A Beach! Animal Art From Discarded Flip Flops
Landmark Study Fleshes Out Fishy Friendships
Comments