In another one of his dare-devil moods, no doubt, President Vladimir Putin took flight on a hang glider yesterday to show a young flock of Siberian white cranes how to fly.  Yup, we have photos and a video to prove it!

Here is Mr. Putin 'disquised' in his white flight suit to match his white hang glider, so the cranes won't recognize him! 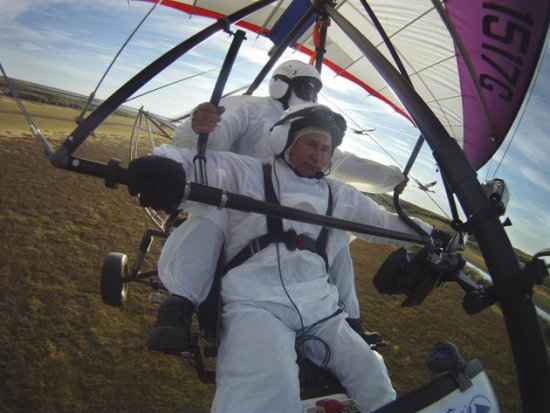 I wonder what the cranes would do if they knew their country's president took such an interest in them. 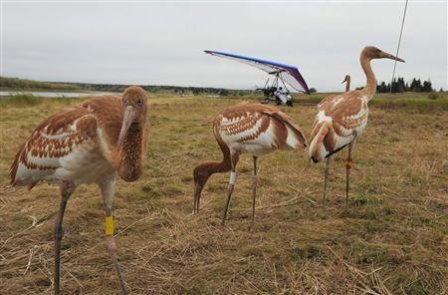 Mr. Putin is known for occasional stunts, as well as for his love of animals.  He has posed with a polar bear and tracked a Siberian tiger, and didn't he go horseback riding shirtless? Maybe he uses these interactions with animals to make him seem more human and more likable. He does provide some entertainment.

He did get the flock moving, and that's a good thing!  (I never thought I'd be writing about Vladimir Putin and animals two days in a row!)

For more photos of Putin and his stunts, see the Photography Blog at the Dallas News.

Birds
Conservation
Fun
Fun Stories
News Stories
Science
Videos
Weird, Odd or Bizarre
Wildlife
Animals These Friends Of Mine Love
Was This Weasel On Back Of Woodpecker Photo-shopped?

This is One Angry Turkey! The Bonus Thanksgiving Animal Video of the Day!!!