Cell phone video voyeurism seems to be heading for a new low as people
get more focused on filming a tragedy instead of preventing one.
Fortunately for this little golden retriever pup who was struggling
against drowning in a 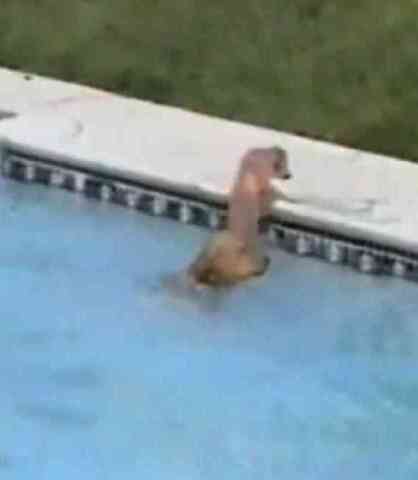 Golden Retriever Rescues Puppy from Pool (You Tube Image)swimming pool there was someone besides the owner
seeing what was going on and took appropriate action to save its life.

There is no word on exactly how the puppy ended up in the pool, but, like all toddlers, they can be a bit unsteady on their feet. Regardless of how, the puppy did end up in the drink, it managed to get itself to the side of the pool, but didn't have the length or strength to hoist itself up onto the surrounding pavement.

Fortunately Mom was nearby and she's not called a golden retriever for no reason. She flung herself into the pool without a moment's hesitation to affect a water rescue. First she tries to push from beneath, but when that doesn't work she rushes up the pool steps and drags her offspring out of the pool by its collar. Once she was absolutely sure that she had retrieved that precious life she finally let go.

She was obviously quite distressed because she pulled her pup quite a ways from the pool before letting go. While she was hailed as a great hero, her owner was called a zero for filming the incident rather that coming to the aid of the compact canine. Check out the video to see what you think.