I’m proud to present Jessie, my golden retriever pal, for our first co-review. We decided to take her crocodile-like teeth for a playtest with one of the legendarily durable toys from Tuffy. (VIP Products) The Tuffy claim to fame are the ultra-durable toy line. Each toy is crafted with four layers of tough material and seven layers of stitching. Some of their basic toy shapes have been tested by tigers! If Tony and his pals can safely enjoy Tuffy toys, then surely Jessie’s steel trap of a mouth will spare Moosasaurus, right? 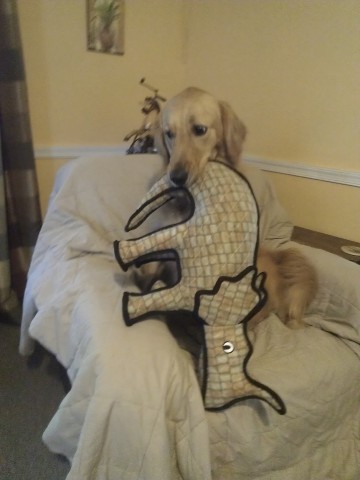 Moosasaurus is a huge, brown, squeaker-free dinosaur that was loosely designed after the mighty styracosaurus. It’s much heavier and sturdier than I thought the dinosaur was going to be; Moosasaurus is even taller than my Yorkie! This hefty beast ranks a respectable “8” out of “10” on the Tuff Scale, and since 10 is tiger-worthy, I had a good feeling that Moosasaurus would be a nice fit for Jessie. 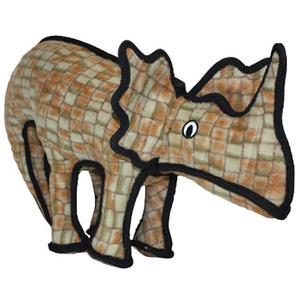 Jessie took to Moosasaurus instantly, and began violently shaking the dino around by its antlers in a fit of pure bliss. She threw and shook this Tuffy toy for hours on end the day that they met, and the Moosasaurus still stands strong after weeks of love/abuse. Jessie easily shreds lesser toys to satisfy her habit of scissoring toys in half with her back teeth, but outside of shaking the Moosasaurus around between naptime cuddles, it hasn’t suffered that fate. 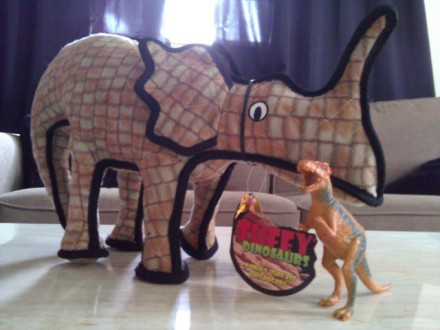 If you’ve got a big, hardcore chewer of a dog that goes through toys like a buzz saw through a plank of balsa wood, I whole heartedly recommend the Dino Series of Tuffy Toys. Even though Moosasaurus is our favorite, each Dino has its perks. Do your research to learn which prehistoric pal is perfect for your pooch.

While each individual toy might seem expensive, consider the money that you’ll save in the long run by investing in a truly sturdy toy that your savage doggie will enjoy for years on end. It’s a must-buy for dogs who are hard to shop for! Besides, it’s totally worth the admission price to watch Jessie take her Moosasaurus to bed with her as a special “Teddy Dinosaur.”