A different kind of election was also settled this week as people at Alaska
Zoo were voting for animal president of the facility. The race was run
between Ahpun the polar bear and Denali the gray wolf, with Yertle the
alpaca as 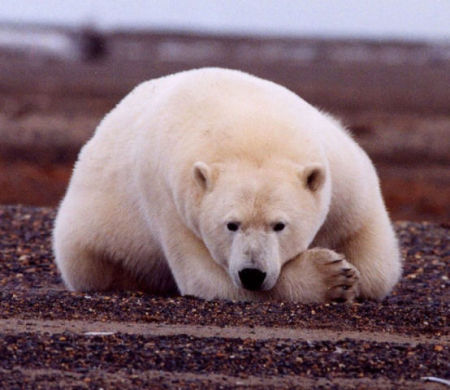 Polar Bear (Public Domain Image)a write-in candidate. While the nation was waiting for the
ballots to be counted, staff and patrons of the zoo waited anxiously to
find out who would be the zoo's first president.

The election was a stunt to raise funds for the zoo. People could pay $1 per ballot to vote. The zoo was able to raise $4,500 and increase awareness of the zoo and its need for funding. The project also managed to inject a bit of levity into a contentious campaign season that was filled with negative ads from both Republicans and Democrats.

Ahpun trailed behind Denali the wolf for much of the election, but a sudden surge in votes on Tuesday put  her over the top and she won by 300 votes. Denali's chances of winning were most likely foiled when the Anchorage Midtown Rotary Club sponsored Yertle as a write-in candidate.

On Wednesday Ahpun declined to take a victory lap for the cameras, but was more than willing to pose for a victory nap.

Inauguration Day is scheduled for December 9 when the zoo will also kick off the Christmas season with their "Christmas for Animals" event.