Piper The Dog And His Own "Project Runway"

Piper is a working dog who has the best job in the world -- for a dog
that is. This little Border Collie spends his days at the Cherry Capital
Airport in Traverse City, Michigan running around the runways chasing
off birds, rabbits, foxes, and other wildlife to keep them out of the
way of the aircraft to help keep both safer. Since his kind of canine
was bred for herding he is in his element. 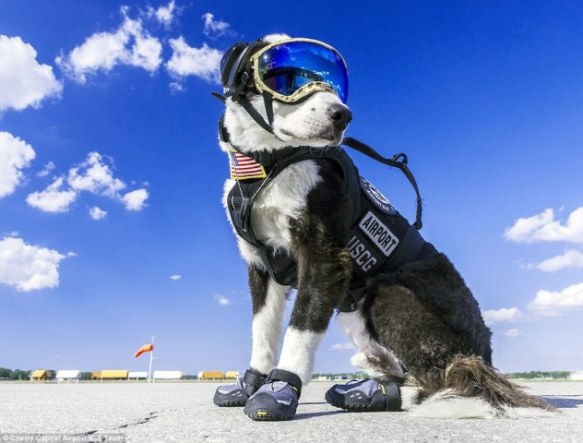 The seven-year-old pooch works as part of the Federal Aviation Administration's required Wildlife Hazard Management Plan for the airport. Piper is kitted out with some seriously bad ass gear to make sure that he also stays safe on the job. Paws are not made for running on the tarmac so he has some cool running shoes. The noise from all those engines are damaging to ears so he has his ears protected, as well as his eyes from flying dirt and debris (and the masonry sand they spread at the airport to increase friction). Of course he also has a vest that identifies him as official. This all works together to make him look amazingly cool. 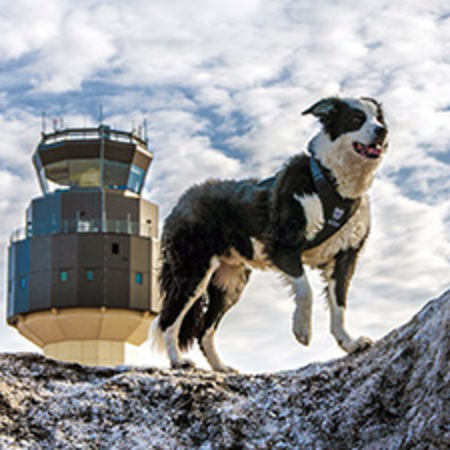 Piper's human dad, Brian Edwards, is an operations supervisor at the airport. He is in the enviable role of bringing his dog to work each day and getting to work with him in the field.  No doubt Piper thinks that is pretty cool as well, especially when you combine that with getting to chase wild animals. Most dogs live with people who try to keep them from this delightful past time (with good reason).

One of the reasons Piper was able to get the airport gig is because he is a volunteer. Training and maintenance of a professional dog can run upwards of $15,000 a year. Since Piper lives with Edwards and is trained and handled by him. this saves the airport a bundle.

Piper isn't the only deterrent to wildlife at the airport. His work is supplemented by sirens, pyrotechnics, and other technologies to keep birds away from aircraft. After a little more than a year of employment Piper seems destined to remain as an indispensable member of the staff. And that suits him just fine.