Enough with The Grey, it's time to think pink! An arctic wolf at the International Wolf Center in Ely, Minnesota, decided to celebrate Valentine's Day in his own unique way. Meet , one of two “retired” arctic wolves living a life of leisure at the IWC. Malik was named for the late Malik Sealy, an NBA basketball player for the Minnesota Timberwolves who died in an automobile accident on May 20th of 2000. 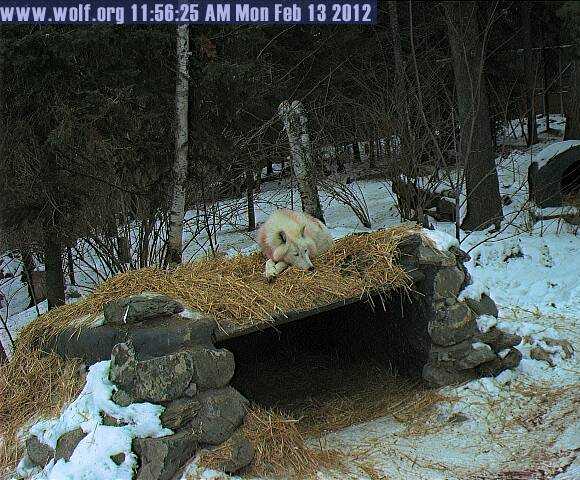 Malik has lived in the retirement enclosure at the IWC since September 2009 and he was joined there by his fraternal litter-mate the following year. Both wolves were born on May 8th, 2000, and were featured “Ambassador Wolves” in the IWC's exhibit pack for the better part of a decade.

Compared to most arctic wolves in the wild, Malik and Shadow are well-fed and receive regular vitamin supplements from the IWC's hard-working wolf care staff. As a result, they usually display glossy snow-white coats that noticeably thicken before winter arrives and thin out as summer comes around.

The key word is “usually”... and on the morning of February 13th Malik was seen on the Retirement Cam sporting quite a different look: one might say he really felt “in the pink”!

We assume that Malik so enjoyed the Saturday night feeding (typically a road-kill deer) he shared with Shadow, that he wanted to revel in the memory a couple of days later. Since wolves don't have iPhones with which to record all the interesting things in their lives they do the next best thing, a behavior known as “scent rolling”.

By the looks of it, Malik returned to Saturday night's dining site and rolled around on the snowy forest floor, thus transferring the scent of the deer to his coat and allowing him to savor the aroma as he dozed atop the main den. Though the scent may have satisfied one of Malik's senses, the sight of a pink-tinged white wolf eminently pleases one of ours!