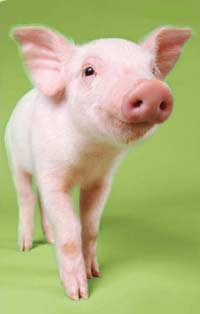 Recently 2 people with Type 1 diabetes have been able to stop their insulin injections due to undergoing a minimally invasive laparoscopic procedure that places encapsulated pig insulin into their abdomen.  A bio-tech company in Australia, Living Cells Technology, has tested and found positive results of a controversial experiment to see if transporting cells from newborn pigs to human volunteers would be beneficial in the treatment of diabetics.  The NHMRC (National Health and Medical Research Council) uplifted a 5 year ban in 2009 preventing animal to human transplantations to approve the experiment, but not without some public scrutiny.

Although pig insulin is said to be cheaper and more accessible than human insulin, some saw the project as unsafe.  The concern surrounds the fact that pigs carry diseases that can easily transfer over to humans.  The biggest concerns protesters have includes endogenous virus and even AIDS.  Paul Tan, CEO of Living Cells Technology, assures that pigs can be bred in a way that prevents them from carrying such diseases.

Despite the controversy researchers are using the pig insulin in hopes of delaying effects that Type 1 diabetics often endure including blindness and loss of limbs.  The initial trial took place in New Zealand, and now the New Zealand Minister of Health has approved testing in higher dosages of the capsule that has been dubbed Diabecell.

Health
News Stories
Pigs
Science
Technology
Dogs on Wheels! The Rolling Animal Video of the Day!!!
Signs Of Illness In Fish Are Easy To Spot, If You Know What To Look For
The Weekly Buzz! Spiderman Namesakes, Fussy Cats, Sexy Mosquito Repellent, & More!
Neuticles: Helping Dogs Maintain The ‘Manly’ Look After Neutering
Comments