Photographer Scuffles With Octopus As It Steals His Camera

Getting caught in the tentacles of a giant octopus seems to be the stuff
of television and old science fiction B movies, but it does happen.
Just ask Drew Collins. Back in January he and some friends went diving
off 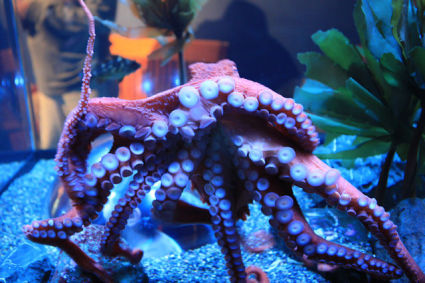 Giant Pacific Octopus (Photo by Cliff/Creative Commons via Wikimedia)the coast of Washington state to do some underwater photography.
They started out together, but the next thing Drew knew he was on his
own. Being an experienced diver, he didn't worry about it and began
shooting as he found a giant Pacific octopus in its den.

After a couple of shots and a moment adjusting the image, the octopus began to move. Collins was thrilled with the opportunity to spend the dive photographing the octopus. When he looked down to check the third image of the creature it took that moment to strike. 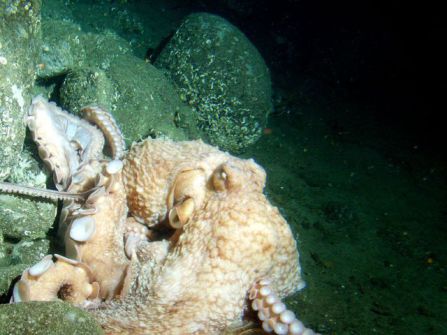 Giant Pacific Octopus (Public Domain Image)Drew was quickly outnumbered by the creature's tentacles. It grabbed for his face mask and he struggled to keep in in place and kept working to detach the tentacles from everywhere while holding tight to his camera with the other. The octopus seemed to want the camera.

After a struggle, Collins finally made the decision to let go of the expensive camera and disconnected it from the lanyard. The creature accepted the exchange and Collins headed for shore making sure he knew the spot where the encounter occurred.

That was hardly the end of the story. Once back on shore Collins and a friend made plans to go back into the water to retrieve the camera.

With two of them they were able to remove the octopus from his den and retrieve the camera, although it was no longer as new as it had been at the start of the day. The cephalopod had used its sharp beak to gnaw on the dome port of the camera, scratching it beyond repair.

Collins, while not thrilled that his brand new camera was damaged, he still has a pretty good attitude about the whole thing. After all, it was not him the octopus had dragged into his lair to chew on. That and he has a really great story to tell around other photographers.

Fish
News Stories
Weird, Odd or Bizarre
Wildlife
Signs Of Illness In Fish Are Easy To Spot, If You Know What To Look For

For That Jellyfish Kind Of Mood

Create Your Own Cute Jellyfish
Comments