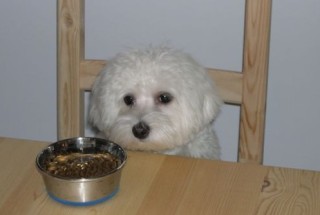 Europeans have felt the personal impact of the global economic recession even longer than we have in the U.S. One of the fallouts of this crisis is that many families can no longer afford to care for their pets. Family pets have been left at pet shelters in numbers that surpass each other every month; and, also for economic reasons, there are fewer people adopting pets. We see the same trend at work in the U.S. today.

But here's an inspiring story, one which gives us in the U.S. a model to emulate....

A little more than two years ago, a German woman named Claudia Holm was struck by a TV show which told of a family, now on social welfare, that was left with enough money after their monthly bills to feed their children or their dog. The kids were devastated for weeks because their parents had to bring the family dog to a shelter.

Claudia Holm developed a plan for a pet soup kitchen and organized a non-profit organization to help families keep their pets during hard times. She called the organization "Tiertafel," German for "animal table." Tiertafel provides food for dogs, cats, rabbits, and other pets whose families can't afford to feed because of financial strain. Of course, to get assistance from Tiertafel, pet owners have to provide documentation that they are receiving some kind of social assistance.

Tiertafel has not just saved 6,291 pets from starvation or being "euthanized." It has helped to keep 4,028 families together at a bad enough time in their lives. We should be setting up "pet tables" in our economically hard-hit communities as well.