Pit Bull Blamed For Attack On Toddler...But It Was The Piranha

Early last week an 18-month-old girl stuck her hand in the family's
aquarium and had the end of one finger bitten off by one of the piranha
in the tank. Her parents came running when they heard her screaming.
When they found her bleeding and severed finger, they automatically
blamed the family's 65 pound pit bull. 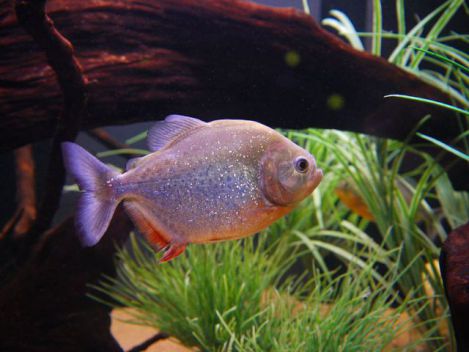 They called 911 and the toddler was taken to the hospital by ambulance. Once in the emergency room the doctor said that the wound was not the result of a dog bite. Authorities contacted the father at home to let him know. Dad's paternal instincts kicked in immediately. He fearlessly plunged his hand into the aquarium, pulled out one of the fish, and slit it open with a knife.  There he found the missing fingertip and rushed it to the hospital where it was reattached.

It is not known how the child accessed the tank and there are no charges pending against the parents. The Illinois Department of Children and Family Services investigated the home to make sure that there were no problems with the home and family environment and found none.

Piranhas are freshwater fish from rivers in South America, and are well-known for their razor sharp teeth and voracious appetite for meat. This reputation has been greatly enlarged upon by Hollywood. Piranhas in aquariums are accustomed to receiving food regularly from the top of the tank. It would be very easy for the fish to mistake any movement at the top of the water as the arrival of food.

The most common type of piranha sold as pets in the U.S. is the red belly. It is not known if this was the species that bit the girl.

People who choose to have piranha as pets need to do their research first, have a large aquarium to hold them, and feed them using tongs for safety's sake. It is also a good idea to have a secure cover for the tank with a lock to keep people from reaching into the water.

Have You Ever Seen A Feather Starfish? The Animal Video Of The Day!!!
Comments