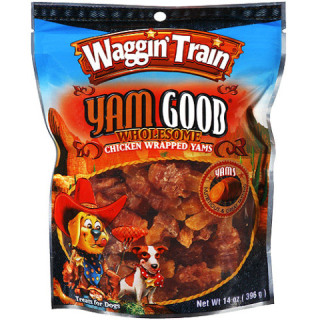 Waggin' Train Yam Good, alleged to contain contaminated chicken jerky An Illinois dog owner filed a $5 million class-action law suit today on behalf of his deceased dog and at least 100 other dogs whose owners claim died of kidney failure as a result of eating Waggin' Train chicken jerky dog treats. The claim was filed against the parent company of Waggin' Train, Nestle Purina, and Walmart, which sells the Waggin' Train brand.

Dennis Adkins, who filed the suit against Nestle Purina and Walmart, claimed that he purchased the Yam Good treats that were advertised as "just wholesome goodness," and "what nature intended," and gave them to his Pom, Cleopatra, for three days before she got sick.  Eleven days later, Adkins dog had died from kidney failure.

But no demand of withdrawal of these products was made, nor did Nestle Purina voluntarily remove their chicken jerky products from the market. Nestle insists that its treats are safe to feed as directed, in this case, one per day.

A Walmart spokesperson said, "If evidence is found linking a contaminant to our products, we will take
appropriate action."

Atkins claims that he gave his dog the Yam Good treats as directed. The suit claims breach of warranty, unjust enrichment, negligence.
product liability and failure to warn and that the class of potential defendants is at least 100 consumers nation-wide.

For better pet foods, these Top 5 Dog Foods may work better for your dogs.

2019 Halloween Costumes For Our Pets
PetsLady's Pick: Cute Little Guard Dog Of The Day
Pets and the Zodiac: Aquarius