Sugar, a deaf, pure white cat, living with her owner in a Boston apartment building, survived a fall from the 19th-floor sliding glass window of her home two days ago, landing alive, and practically well, and is ready to meow about it.  How was she able to do it? A veterinarian from Boston's Animal Rescue League explained that cats have a better chance of survival when they fall from very high places than from just high places. And, he said, that if Sugar had fallen 9 stories instead of 19 stories, she might not have survived. 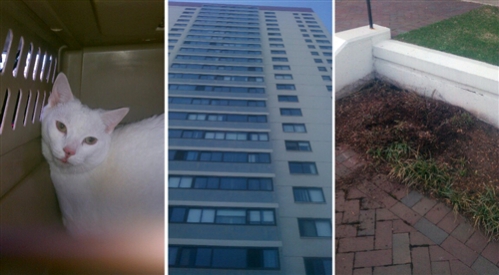 Sugar, even though science explains her survival, is still a 'miracle cat.': image via msnbc.com

With no broken bones, just some bruises on her lungs, Sugar, you might say, is a miracle cat.  But according to the rescuers, she had more than divine intervention on her side...  Apparently, when cats fall very far from the ground, say 150 to 200 feet off the ground like Sugar did, they have an opportunity to relax and spread their four legs out in the air like a flying squirrel, which slows down their speed.  They then have an opportunity to aim.

Sugar was smart too.  She aimed for the single patch of mulch on the ground that was surrounded by cement.  Had her aim been off-kilter....