Some New York City Hotels carry a mystique. One known more for it's telephone number than its service was the Hotel Pennsylvania. So much so, it became the inspiration for Glenn Miller's Big Band hit of the 1940s (written by Carl Sigman & Jerry Gray). Today PEnnsylvania 6-5000 is the oldest continuing phone number in New York City. Based on the old telephone exchange name system, the first two letters "PE" in PE6-5000 stand for the rotary dial numbers 7 and 3, making the number (with Manhattan's area code) +1 (212) 736-5000. 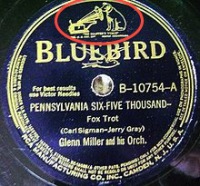 However an interesting connection that ties the past to the present for this hotel might have been foreshadowed on Glenn Miller's RCA record label. "His Master's Voice" was a trademark of Nipper the dog listening to a wind-up gramophone first painted by Francis Barraud in 1899. Perhaps a stretch but synchronistically, dogs now play a major part in distinguishing the Hotel Pennsylvania from its competitors in the 21st Century.

Today, while many pet owners check into the "doggie" headquarter hotel for the 137th Westminster Kennel Club Dog Show, Feb. 11, 2013, they may not remember PEnnsylvania 6-5000, nor the fact that back in the 40s, dogs were not allowed in the lobby, let alone guestrooms and public areas.

There are still many Manhattan hotels in 2013 that do not allow pets. The Doubletree Metropolitian and

Fitzpatrick Grand Central are two hotel hold-outs that have maintained their "no pets allowed" policies over the years, and even advertise themselves as such on sites such as "Vacations Made Easy." The rationale for not accepting pets is based on travelers who might be allergic to pet hair or who just would prefer not hear dogs barking.

Times have changed however, and now most of the major hotel brands such as Marriott and Hilton do accept pets. Acting once again as this year's host hotel for the Westminster Dog Show, the Hotel Pennsylvania also sees the event as a strategic opportunity to market their "pet friendliness" to attract guests who like to travel with their pets other times of the year.

While some competing NYC hotels limit the size of pets they will accept, the Hotel Pennsylvania allows two dogs per room with no weight restrictions. Additionally, they proudly promote their Pre-Westminster 2012 "Pet Friendly Hotel Of The Year" Award based on their exclusive ‘Five-Paw’ services for canine Westminster hopefuls.

The hotel even provides an exercise room for the dogs and their masters. In the hotel's Green Room Dog Spa, dogs can conduct workouts when they are not being judged on the show floor at Madison Square Garden (directly across the street from the hotel).

Mac, an Australian Terrier from Sarasota, Florida works out on a treadmill in a doggie spa at the Hotel Pennsylvania with his eye on a treat he will be awarded at the end of his workout. 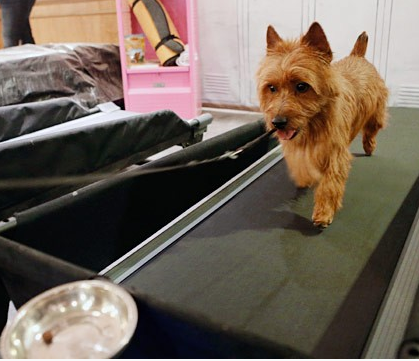 The Spa also features bathing areas, drying stations, a Jacuzzi, gait analysis technology and an on-staff veterinarian to attend to the dogs' health throughout the weekend.

While they haven't actually installed "doggie bathrooms" just yet, the hotel has built an indoor relief station located in the hotel's basement. Covered with straw, it comes complete with several red plastic fire hydrants to make the pooches feel right at home. 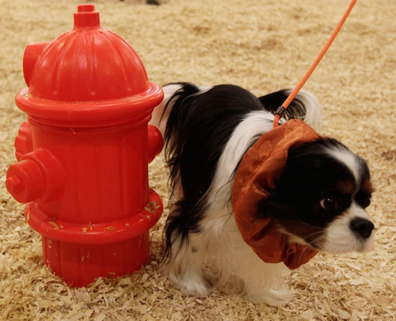 Further distinguishing themselves from their competition and showing a marked attention to detail, the hotel 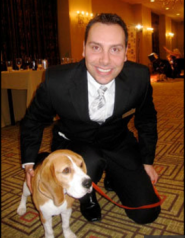 Doggie Concierge, Jerry Grymekhas designated a member of their staff to make sure the dogs are receiving the same quality service as the two-legged guests. Doggie Concierge, Jerry Grymek is responsible for servicing the canines, which involves everything from overseeing the spa, coordinating press conferences to photo shoots and sending out for special room service treats.

Requests can sometimes go beyond the call, he notes. "One year a woman asked for an opera singer to serenade her dog before the show," said Grymek. "Another year we had a request to roll out an actual red carpet for a dog when they arrived at a hotel so he would feel special."

This hotel was wise enough to capitalize on this market segment, as they've been able to convert both the pups and their owners into satisfied and loyal returning guests. Times have changed from the the days of "Pennsylvania 6-5000," which was probably the last time this hotel received this much attention. Going to the dogs in 2013 might not be a bad thing at all, and just might be that phone number you want to put on speed dial, the next time you're traveling into Manhattan accompanied by your best friend.