The Suzaka Zoo in Japan has been more like scenes from the movie
Madagascar lately.  Those intrepid penguins seem to be constantly making
plans on how to escape. For the third time this month baby penguins 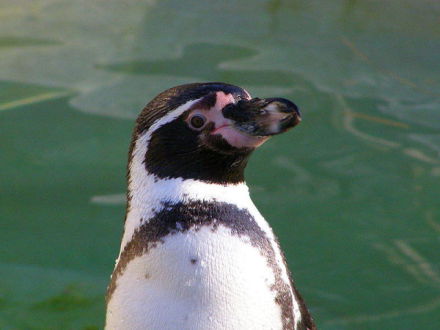 Humboldt Penguin (Photo by Frank Wouters/Creative Commons via Wikimedia)
have managed to escape captivity and make a break for the wild. The
zookeepers are more than a little baffled that the little birds keep
defying their best efforts to keep them caged.

Earlier this month a pair of three-month-old chicks escaped the zoo by jumping off of a slide. The zookeepers attached boards to the bottom of the slide to prevent this from happening again. Well, the penguins managed to outsmart them and just two days later another chick made a break for it by going under the fence. The zookeepers sealed up the bottom of the fence, feeling certain that they had made the prison escape-proof.

So they thought. Early Tuesday morning a fourth penguin just hopped over the fence and went skinny-dipping in a nearby pond.

The gang of four will now be kept in a concrete cell-block, er, cage with nets -- at least for the time being. The cage is also indoors just to make extra sure that the four little Houdinis can't make a break for it again.

This is not the first time that Japan has dealt with fugitive penguins. Earlier this year a Humboldt penguin went on the lam from a Tokyo aquarium. He tasted freedom for 82 days before he was recaptured.

Perhaps these places need to review their menus. They could have all just been trying to find a better place to get sushi.

PetsLady's Pick: Cute Ugly Christmas Sweater Bald Bird Of The Day
Bald Eagles Deprived Of The Wind Beneath Their Wings

Bio-Logging Is Changing What We Thought We Knew About Wildlife, Like Birds Don't Choose Partners For Their Good Looks