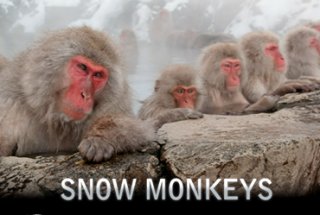 life of Japanese Macaques deep within the snow-covered mountains of Northern Japan, in a valley named Jigokudani, meaning “Hell Valley,” which is also referred to as the Japanese Alps.

Liam Neeson narrates this intimate look at the family life of macaques when Snow Monkeys aired in April and again in July -- and is now also available for online viewing in it’s entirety on YouTube.

This two-person film crew followed one specific snow monkey troop (160 members in total) for nearly two years to film the unique social behavior of this communal primate society- with a surprised bonus of being able to document the bonding of one very unlikely pair within the group. 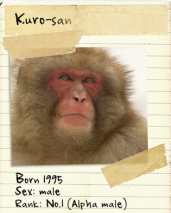 While females play an important role in any Macaque tribe, this documentary centers on the  number-one Alpha member of the group called Kuro-san and one very low-ranking but adventuresome youngster called Hiro. As a young leader still new to the job, when we first meet Kuro-san he appears to be a solitary soul who’s not yet learned any social skills. Standoffish and somewhat of a curmudgeon, he’s not a warm-and-fuzzy type of commander-in-chief.

Hiro, on the other hand who appears totally oblivious to his low-ranking 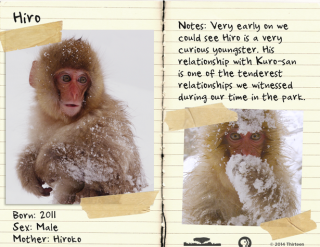 standing in the group reaches out to the reticent and solitary leader, forming a lasting bond that the Pontecorvo’s were able to capture in some very endearing moments.

While Hiro’s behavior is an out-of-the-box gesture, it’s received by Kuro-san in a way that's compassionate and life-altering -- after only a couple of seasons. Over this time, the leader finds a new confidence and Hiro assumes a position and respect from his fellow tribe members, well above his birthright. 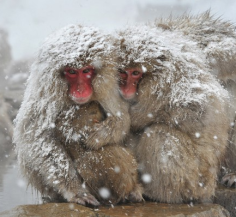 The cinematography in this PBS Nature documentary follows the troop through all four seasons beginning in early winter experiencing all the difficulties and dangers the harsh snows present.  Brutal winter storms can last for days, and the snow monkeys including Kuro-San and Hiro have learned that survival depends on keeping friends and family close. Their refuge in the hot springs provides them with warmth and also serves as a respite where they can communicate and groom their fellow troop members.

Spring produces fresh growth in the forest and new babies to care for by the females. Summer brings rain and flowers in full bloom, while cooler water in the hot springs turns into perfect summer swimming holes for the energetic youngsters.  With the changing colors of Fall, the mating seasons arrives.  Behavior is by turns edgy, aggressive and affectionate. The entire troop forages, readying themselves for the return of winter.

When Joe and Nimmida were asked during the intermission of the PBS showing of Snow Monkeys if they’d like to return and film a sequel, they indicated they would especially like to revisit this particular group to see how they changed over time - especially how the relationship between the leader and his number-one fan has matured and perhaps taken on new meaning.

Knowing that males have a tendency to leave their initial troop when they seek out females to mate with, it would be great to learn if Hiro moves on to a new troop but maintains some of his unique out-of-the-box thinking - like this curious little rascal!

Brave Dog Leads a Rescue to a Burning House! The Awesome Bonus Animal Video of the Day!!!

Do Lots or Dolittle with Polar Bears?

Bear Versus Caribou -- The Animal Video of the Day!!!
Comments